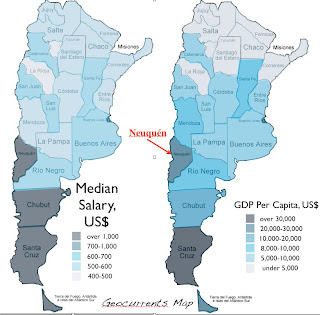 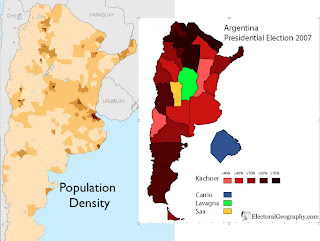 Latin American is noted for its economic inequality, the gap between rich and poor generally being considered the largest in the world. Class inequity often has a strong regional component; Brazil and Mexico are well known for their income variation from state to state. Less appreciated is the fact that Argentina is equally skewed. Its wealthiest province, Santa Cruz, produces more than fifteen times the value of goods and services per person as Chaco, its poorest ($30,496 vs. $2,015 in nominal terms). Such stark disparities in production do not translate directly into differences in income, but median monthly salaries do vary by more than 100 percent from province to province.

Argentina’s geographical divide is threefold, featuring a poor north (moderately populated), a middle-income (and more densely populated) east-center, and a wealthy (and lightly populated) south. The east central region holds the national core, focused on Buenos Aires. The official city of Buenos Aires (population 3 million) is Argentina’s third most productive subdivision, but the rest of the metro area, with an additional 10 million, does not rank so well. Buenos Aires Province, which includes the outer city as well as a good part of the country’s agricultural heartland, is below the national average in per capita GDP. The same is true of the major manufacturing center of Cordoba, as well as the settlements along the foot of the Andes in the west-center and northwest. The wealthy provinces are all found in the sparsely settled south. As an arid region with ample water (produced by meltwater from the Andes), the south’s prosperity is based on mining and energy extraction. In the top two provinces, Santa Cruz and Neuquén, mining accounts for 47 percent and 43 percent of economic output respectively.

Pronounced regional economic disparities often correlate with spatially distinctive voting patterns, as poor regions support one candidate while wealthy ones favor another. This is not the case in Argentina. In the 2007 presidential election, victor Cristina Kirchner fared equally well in some of the poorest and richest provinces. She did lose one wealthy subdivision, the city of Buenos Aires (see inset on the map above), and she took the second most productive province, Neuquén, with a plurality of only 37 percent.

Neuquén’s split vote in the 2007 presidential election was no surprise. Politics in the province is strongly regional, with many voters shunning national political parties. Every gubernatorial election in the province since 1961 has been won by the Neuquén People’s Movement. This movement, founded by Lebanese-born Elías Canaán Sapag, emerged out of a feeling of neglect and exploitation by the central government. Until 1955, Neuquén was a territory rather than a province; this status allowed Buenos Aires to manage, and profit from, its rich natural resources. The Neuquén People’s Movement has pushed with some success for a federal approach to government, hoping to empower provincial administration.

If current plans come to fruition, Neuquén’s economy may soon get another boost. In July 2010, the Spanish energy company Repsol YPF announced that one of its subsidiaries would begin drilling South America’s first shale-gas well in the province, using the new extraction techniques have vastly increased the reserves of natural gas in North America. Argentina depends heavily on natural gas for its electricity supply, yet is short on reserves; shortages in 2004 caused a serious energy crisis in Buenos Aires. Shale-gas also has huge drawbacks, being highly polluting. Neuquén has recently been trumpeting its tourism potential, which will surely come into conflict with the new energy enterprise.