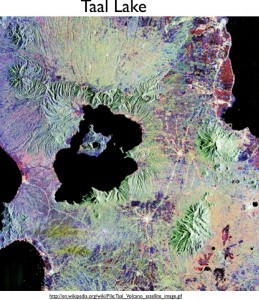 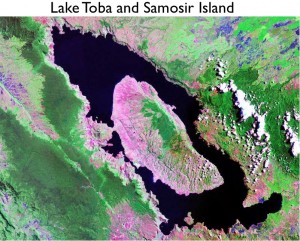 Two of the lakes in question were formed in volcanic craters, Taal in the Philippines and Toba in Indonesia. Massive volcanic explosions in the past produced the depressions that eventually formed these lakes, while subsequent volcanism built up the islands within them. The Toba Event—the supervolcanic eruption of the Toba volcano that occurred some 69,000-77,000 years ago—is believed by some scientists to have plunged much of the world into a decade-long volcanic winter that reduced the global human population to a mere 1,000-10,000 breeding pairs.

Past eruptions of Taal Volcano were never as devastating as the Toba Event, but Taal is still counted as one of the world’s sixteen most potentially deadly volcanoes. Taal Lake is of note mostly for its biological oddities. Taal was once a salt-water bay; after it was separated from the sea, it turned fresh gradually, allowing a number of oceanic species time to adjust to freshwater conditions. Taal thus supports freshwater sardines as well as a freshwater sea snake. It once had bull sharks as well, but they were exterminated by local fishermen in the 1930s. Bull sharks live in freshwater environments elsewhere in the world, including Lake Nicaragua.