If you want to have a good laugh this week, I would suggest diving into the bountiful sea of articles on French politicians’ recent missteps. I will start my overview of recent political stumbling with the right-wing National Front before turning to France’s other parties.

The top of the hit parade features Marine Le Pen.  For all the Front National’s attempts to re-brand itself into a forward thinking, non-racist or xenophobic party, recent incidents show that the characteristics that were evident when her father was at the head of the party remain. Marine Le Pen was recently strapped with a ten thousand euro fine for having disseminated fake flyers. These posters featured an image of Jean-Luc Mélenchon, a prominent French socialist, with a sentence he uttered in a speech to the city of Marseille: “Il n’y a pas d’avenir pour la France sans les Arabes et les Berbères du Maghreb” [‘There is no future for France without the Arabs and the Berbers from the Maghreb.’] A line at the bottom of the postcard-sized flyer reads “Votons Mélenchon” [‘Vote for Mélenchon’] along with a translation of the slogan in Arabic, but written incorrectly. As it turns out, the Front National produced the fliers, but neglected to include their party symbol or note in any other way that the whole effort was a parody designed to discredit the socialist politician. While Mélenchon readily admitted that he had made the statement in question, he angrily denounced the lack of taste of the tract, which features a green background, color of Islam, and the use of Arabic characters. As he put it, “I only express myself in French, the language of the Republic. This tract gives a meaning that I never wanted to give to my action.” Although the Front National initially tried to place the blame on some of its own local members, denying its role in the production of the flyers, Marine Le Pen eventually stepped forward to assume full responsibility, going on to compare Mélenchon’s attitude to “des pleurnicheries de chochotte” [‘whimpy whinings’.]

As if the French newspapers did not have enough material to use, Marine Le Pen made sure to become their greatest muse with another misstep. This time she claimed the need to re-introduce pork in school cafeterias in cities in which the Front National has gained power. One week after the National Front’s breakthrough in the French municipal elections, Marine Le Pen boldly declared on national radio that “il est interdit d’interdir” [‘it is forbidden to forbid.’] She then proceeded to declare that her party would not accept any religious demands in school menus, as there is no reason for religious affairs to enter the public sphere. However, none of the cities in which the National Front took power had actually abolished pork from their cafeterias. As such, students in Fréjus ate sautéed pork this past Monday for lunch, and those from Hénin-Beaumont were served ham. The students in Béziers will be eating “macaronnade de porc” (pork stew) this week. Jewish and Muslim students are simply given the option of eating turkey or chicken instead of pork—an alternative that even Marine Le Pen would not dare oppose.

“[A] citizen association for the defense of human rights. It takes care of politics, not in the politician sense of the term, but in the sense of the general affairs of the city-state. Our goal is to defend liberties. In this sense, the mayorship is paying us homage when it implicitly recognizes the role we can take on.”

As such, the Front National’s most recent move against the Legion of Honor is heavily loaded and can easily be interpreted as indicating a lack of concern for human rights, a long-standing problem for the party. In response, the Ligue des Droits de l’Homme decided to take on the National Front by creating a “republican vigilance committee”. The committee is designed to be an “observatory for the rights and liberties of each and everyone on the territory of Hénin-Beaumont” and will constitute a “black book” of all the instances of disregard for these rights and freedoms by the National Front. In response, the new mayor of Hénin-Beaumont has denounced what he calls a “hate campaign” led by the Legion of Honor, an institution that he has labeled as ‘trying to receive free headquarters on the taxpayer’s dime.’

But the Front National is not the only French party guilty of blatant and flamboyant missteps. With President François Hollande’s recent trip to Mexico, the French population was reminded of his dismal lack of ability in foreign languages, undoubtedly symbolic of a problem existing on the national scale. While trying to echo General de Gaulle’s speech in Mexico in March 1964, Hollande declared: “Le Géneral de Gaulle avait eu la formule qui est restée dans tous les esprits de faire que le Mexique et la France restent ‘la mano dans la mano’.” [‘General De Gaulle had the formula which stayed in the minds of all so as to ensure that France and Mexico would remain ‘la mano dans la mano’.] Perhaps the French President did not realize that he kept a French word “dans” in his own formula, rather than the Spanish equivalent “en”? It is as though he had declared that the French would remain “mano in the mano” (or “hand in the hand”) with the Mexicans. Such a formulation does not exactly have the same effect or glamour that Mr. de Gaulle conveyed sixty years ago when he properly wished for France and Mexico to remain “la mano en la mano” (“hand in hand”).

The Socialist party is also comical despite itself: with the appointment of Manuel Valls as prime minister, French newspapers had a field day with puns on his name: 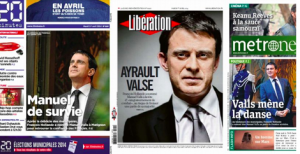 “Manuel de survie” (‘Survival guide’, a pun on the PM’s first name, which means ‘guide’ or ‘booklet’ in French); and Ayrault Valse (Ayrault being the Prime Minister who is being replaced by Mr.Valls.) The latter pun is on the word ‘Valse’, meaning a ‘waltz’ in French, but which also happens to be a homonym for the Prime Minister’s surname. The daily newspaper Metronews went with “Valls mène la dance” (‘Valls opens the dance’), a pun on the French expression “mener la dance,” to ‘lead the dance’ or to ‘run the show.’ Although amusing, these puns show how French newspapers have intentionally been making a game out of their country’s politics.

Such parody is indeed their forte. Le Figaro, arguably France’s largest daily newspaper, even created a fictional series called “Fiction Politique: Le coup du Père François” (‘Political fiction: Father Hollande’s trick”) in which president Francois Hollande decides to dissolve the national assembly. Running about ten episodes, this saga dramatizes French politicians in absurd, imaginary situations for purely satirical purpose. French newspapers and political magazines have also been approaching many of the government’s shortcomings and incompetent actions with a bitter, dark sense of humor. In particular, the right-wing magazine Le Point is particularly virulent in its criticisms of the government: its very title this week was “Vite, on coule!” (‘Quick, we are drowning!’) placed over a headshot of president Francois Hollande and his new prime minister, Manuel Valls.

It boldly declares: “the leftist government’s capacity for blindness is limitless. It never learns lessons from the past. It refuses to see even the most evident realities.” Le Point has even coined the expression “catéchisme néo-con” [‘neo-shit catechism’] to refer to the Socialists’ doctrine which it satirically sums up as ‘let us spend and borrow more, and all will be better.’ The very use of the word ‘catechism’ marks the idea that, for Le Point, the socialist party’s policies are grounded in rank ideology rather than economic or social realities.

However, it is the Guignols de L’info, a band of puppets representing French celebrities and politicians, that takes the cake for irreverence and laughter-inducing skits. Developed by the French TV station Canal +, the puppets spare no one from their line of fire, from the Paris Saint Germain football star Zlatan Ibrahimovic, to Belgian rapper Stromae, to Francois Hollande, and Dominique Strauss-Khan. One rather comical example was a parody for Stromae’s now world-famous ‘Alors on Danse’ song:

Alors tu Valls
And so you Valls [Waltz]  ]

As a matter of clarification, Matignon is the Prime Minister’s dwelling and Fillon was the prime minister under Sarkozy. The Guignols have Stromae singing to the beat of ‘Alors on Danse’ with satirical and irreverent lyrics sounding like the original ones. All French speakers, and many non-French speakers as well, would understand the reference to Stromae’s song, even if they do not understand the puns and inside jokes of French politics. 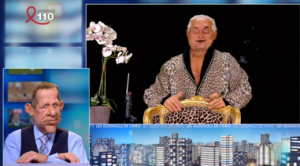 The Guignols also feature Dominique Strauss-Kahn, the ex-head of the IMF who had to step down from presidential contention because he was entangled in a sex scandal. In the clip, he is in a bathrobe, declaring that he knows a socialist who received an “even bigger spanking than Hollande did.” When the puppet anchorman asks him “who?”, he answers “Me. Often, at night, I like to receive a good old lesson” and proceeds to naming his private part, “Francis,” who, he adds, with the daylights savings time, is “up earlier.”

In the past several of weeks alone, an avalanche of incidents has given French newspapers, magazines, and television stations the opportunity to laugh at the expense of many of the country’s leading public figures. The political climate in France is ripe for these opportunities, and if it were all a scripted reality show or soap opera it could hardly be funnier or more puzzling than reality itself.