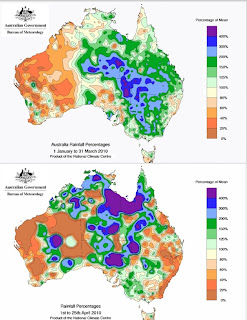 As the Southern Aral Sea dies, another massive lake on the opposite side of the world is being reborn, although its life expectancy is not long. When full, South Australia’s Lake Eyre is about the size of Cyprus. More often, Lake Eyre is a giant salt-flat pocked with briny pools. But Ayer’s drainage area is massive, covering one sixth of Australia, and when heavy rains fall, the lake fills. The lowest part of the Eyre basin — 49 feet (15 meters) below sea level — floods roughly once every three years. The entire lake fills about three times a century.

2009 saw a partial flood in Lake Eyre, and 2010 promises much more. The runoff from the early 2010 storms in central and southeastern Queensland has slowly made its way to the southwest, and is now pouring into the lake. Forecasters predict that at least 70 percent of the basin will fill. Members of the Lake Eyre Yacht Club, who have been waiting for a flood like this for years, are thrilled. As their website announces, “2010 looks like the best year for sailing in the Lake Eyre Basin since 1989-90. HIP, HIP, HOORAY!!!” 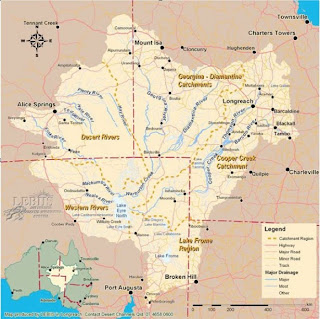 Lake Eyre’s rebirth will almost certainly be temporary. In the lake itself, a familiar boom and bust cycle is in the making. Fish that washed down with the floodwaters will thrive in the nearly fresh water of the renewed lake. In about six months, however, the salt crust will have dissolved, killing the fish. The lake will then begin to evaporate away. As it shrinks, its salt content will steadily increase. Eventually Eyre will turn pink, owing to the beta-Carotene pigment found in one species of salt-tolerant algae. Then it will vanish altogether until the next flooding cycle commences. 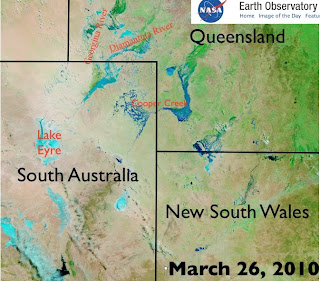 Lake Eyre’s major tributaries–Cooper Creek, the Diamantina River, and the Georgina River–exhibit extraordinary fluctuations of their own. The annual runoff of the Georgina apparently varies from nothing at all in extremely dry years to as much as 6.28 km³ (5,100,000 acre feet) in a year of heavy rains. Copper River has the largest discharge, but little of its water ever reaches the lake. The Diamantina River, the Georgina River, and especially Cooper Creek lose most of their water as they flow across the exceptionally flat Channel Country of southwestern Queensland, where they divide and redivide into innumerable waterways (see image above). Seepage and evaporation in the Channel Country prevents the flow of even the Diamantina and Georgina from reaching Lake Eyre in years of average or below average rainfall. In dry periods, which are frequent and can be long, these streams are little more than strings of waterholes. 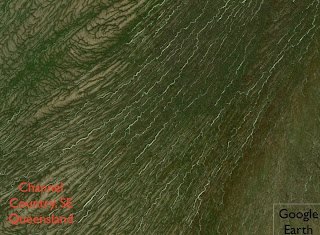 When heavy rains do fall, as they have recently (see map), the Cooper, Diamantina, and Georgina swell into major rivers, up to 15 or even 20 miles wide in places. As the floodwaters rise, local cattle stations (ranches) find themselves isolated for weeks or even months. But the pastoralists seldom complain, because as the waters recede, lush forage returns. During flood periods, the rivers of the Channel Country effectively irrigate vast areas. Years of drought in the early 2000s brought desperation to the region; now, as The Australian reports, the continent’s “Red heart [is] turning green as life returns.”