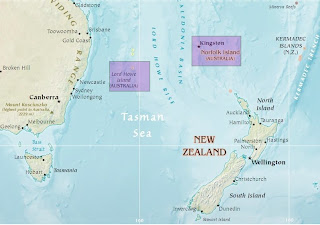 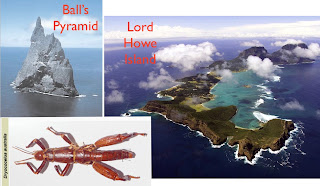 Isolated oceanic islands, with their small to non-existent populations and scant resources, are ignored in most discussion of global geography. Yet there are good reasons to pay them close attention. Remote islands form natural laboratories for research in biogeography, and their unique assemblages of flora and fauna are highly vulnerable to introduced species and other threats from the outer world. In regard to culture and geopolitics as well, isolated islands present us with significant curiosities and anomalies.

Lord Howe Island, a 22 square mile gem sitting near the center of the Tasman Sea, was classified as a World Heritage Site in its entirety in 1982. Its waters contain some of the world’s southernmost coral reefs. Unknown to humankind before 1788, it held an array of endemic bird, insect, and plant species. The first visitors found the island’s wildlife completely — and tragically — unafraid of people. As one seaman reported, “When I was in the woods amongst the birds I cd. not help picturing to myself the Golden Age described by Ovid to see Fowls … walking totally fearless… so we had nothing more to do than to stand a minute or two & and knock down as many as we pleas’d wt. a short stick…” (quoted in Tim Flannery’s superb The Future Eaters, page 177). Within a few decades of discovery, the Lord Howe swamp hen, the white-throated pigeon, the red-crowned parakeet, and the Tasman booby had all been exterminated by human hunters. Several more bird species disappeared after the inadvertent introduction of the black rat in 1918. Similar rounds of extinction have occurred on other newly discovered islands, regardless of whether the first interlopers were European or Polynesian, but on Lord Howe Island the process is remarkably well documented.

The environmental future of Lord Howe Island seems promising. The human presence is strictly limited; only 347 people live on the island permanently, and visitors cannot exceed 400 at any time. A major restoration project is now underway. The endangered Lord Howe rail (or woodhen), currawong, and flax snail have seen significant recoveries. Several invasive species, including feral pigs, have been eliminated, and ecologists are discussing the possible reintroduction of several close relatives of the island’s extinct fauna. In February 2010, Australian authorities announced that they will drop 42 tons of rat poison by helicopter over the full expanse of the island in 2012, taking special precautions to protect the remaining native species. Once rats are eliminated, ecological restoration projects will have a much greater chance of success.

Prospects for environmental restoration were enhanced in 2001 with the discovery of a tiny surviving population of the noted Lord Howe stick insect, Dryococelus australis. Reaching up to 15 centimeters in length, these formerly common insects were called “tree lobsters” or even “walking sausages.” Dryococelus australis is remarkable not just for its size, but for its behavior as well. According to the Wikipedia, “The males and females form some kind of a bond. The males follow the females and their activities depend on what the female is doing. During the night the couple sleeps together with three of the male’s legs wrapped around the female.”

Thought to have been exterminated by rat predation in the 1920s, the Lord Howe stick insect was rediscovered on Ball’s Pyramid, a nearby island. Ball’s Pyramid is itself a remarkable feature; measuring only 656 feet across, its summit sits 1844 feet above sea level (see photo above). Basically a barren rock, Ball’s Pyramid supports one small pocket of vegetation. On and under a single Melaleuca shrub, researchers discovered two dozen stick insects. A successful captive breeding program was soon underway. By 2008 the population had grown to 450, allowing 20 insects to be returned to Lord Howe Island.

The human residents of Lord Howe benefit directly from the island’s unique species. Other than tourism, the island has one major economic activity: the export of kentia palm (Howea forsteriana)seedlings. Noted for its three-meter long fronds, this Lord Howe endemic is considered an attractive ornamental species, and is now grown over much of the world.