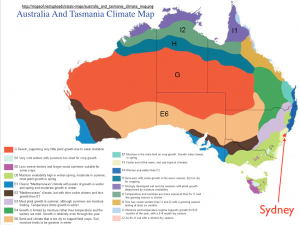 In the various indices of the world’s “most livable cities,” those of Australia generally rank quite high. In the Economist Intelligence Unit‘s (EIU) most recent global liveability report, Melbourne places first, Adelaide fifth, Sydney seventh, and Perth ninth. The EIU index does not consider climate; if it did, Sydney would probably rank higher. What constitutes an ideal climate is of course a highly subjective matter; judging from various web postings on “the world’s best climate,” some people prefer mild conditions and while others favor warmth, some like aridity and while others prefer periodic rain, and some revel in year-round constancy while others demand seasonality. Sydney’s climate, however, would appeal to many: summers are on average warm but not hot (with an average January high of 78°F [26°C]*), while winters are cool but not cold (with an average July high of 61 F [16 C]). Although real heat is occasionally experienced (the city’s record high temperature is 113°F [46°C]), true cold is unknown, allowing tropical vegetation to flourish (the record low is 36°F [2°C]). Although some might find Sydney too wet (with average annual precipitation of 47 inches [1,213 mm]), in every month one can expect at least five hours of mean daily sunshine. By the same token, summer days tend to be fairly damp, with an average January relative humidity of 64% at 3:00 PM, but given the city’s mild temperatures, such a figure remains within the comfort range of most individuals. 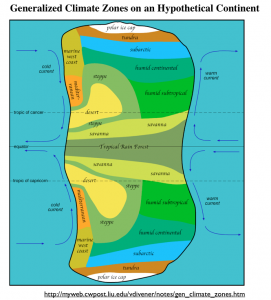 Sydney’s moderate summers surprise many casual visitors, who often associate Australia with blistering heat in the high-sun season. Even geographically aware travelers might be taken aback. Climatic conditions in general are predictable on the basis of latitude, altitude, position on a landmass (whether located in the west, east, or center), orientation of mountain ranges, and so on. First-year students in physical geography are typically introduced to the “hypothetical continent” on which ideal climate zones are mapped. As an east-coast city situated at a latitude of 34°, Sydney lies on the poleward side of the humid subtropical zone on such a map. (On Australian climate maps, Sydney is variably depicted in either the subtropical or the temperate belt.) As such, it would be expected to experience ample year-round rainfall—which it does. But it should also have hot summers and cool winters with occasional cold-snaps—which it does not. Many similarly situated cities are much less equable. The subtropical east coasts of North America and Asia in particular show marked contrast with Sydney. Analogous cities here include Charleston, South Carolina and Nagoya, Japan, each of which has a sweltering average high in the hottest month of 91°F (33°C). Both cities are also appreciably colder than Sydney in the winter: Nagoya’s average January high is 48°F (9°C) and Charleston’s record low is 6°F (-14°C). 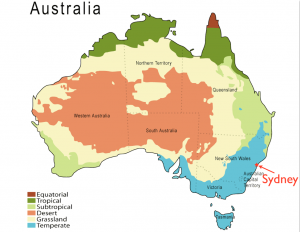 It is not coincidental that Charleston and Nagoya are both located in the northern hemisphere. Similarly situated cities in the Southern Hemisphere are more like Sydney. Montevideo, Uruguay, for example, has an intermediate average summer (January) high temperatures of 83°F/28°C, whereas East London, on South Africa’s east coast at a latitude of 33°, is more moderate than even Sydney, with an average winter (July) high temperature of 70°F (21°C).

The differences between the hemispheres in this regard is likely generated by a combination of ocean currents, which are shaped by landmasses, and the fact that the south is the much more oceanic half of the planet. Sydney owes much of its moderate summers to its maritime location—even its interior suburbs have hotter summers and cooler winters. The subtropical zones in eastern North America and eastern Asia lack such marine moderation owing to the warm currents off their coasts and the greater size of the continents on which they sit. Although the warm East Australian Current does affect Sydney, its influence in the summer is somewhat limited; summer water temperatures off Charleston, South Carolina average about 10°F higher than those off Sydney.

The seeming anomaly of Sydney’s climate is not mentioned in the standard reference work on topic, Glen Trewartha’s The World’s Problem Climates. Trewartha rather regarded coastal New South Wales, like most of the rest of Australia, as climatically unexceptional. As he put it, “Australia approximates in nearly ideal form the climatic arrangement that one would expect on a hypothetical continent where the great planetary controls largely regulate the weather” (75). The one real exception that Trewartha noted (p. 80) is Australia’s lack of an extremely arid but rather cool desert on its coastal flank of its western subtropical belt. 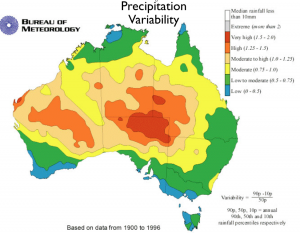 Despite Trewartha’s assessment, Australia is climatically unusual in several regards. Its deserts are both more extensive and less arid than those of other continents. Much of the landmass is also characterized by greater annual variation in rainfall than most other places. Australia owes this characteristic largely to its position relative to the Pacific Ocean, which makes it especially vulnerable to the perturbation of the El Niño–Southern Oscillation (ENSO). As can be seen on the map, rainfall variability is pronounced in Australia’s more arid interior, but is relatively modest in most costal zones. 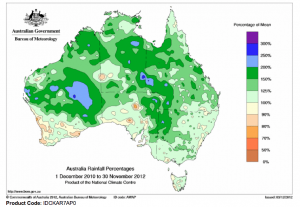 Concern is mounting that climate change could accentuate the continent’s already pronounced precipitation variability. The so-called Millennial Drought that began in the late 1990s and lasted until 2009 was the worst dry-spell on record—which is saying a lot. It was followed by an extremely wet period beginning in 2010 and lasting into 2012. The past three months have again been dry over the southeastern half of the country. Long-range forecasts continue to predict a wet summer over much of this region, but they also indicate a drought striking northern Queensland. Forecasting that 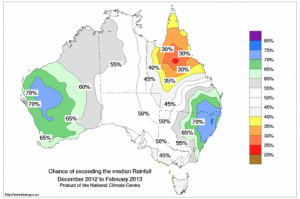 far into the future, however, is still notoriously unreliable.

* All climate data from the Wikipedia articles on the cities in question, except for the relative humidity data for Sydney, which is from the Times World Weather Guide.