One of my favorite blogs is Weather West: California Weather and Climate Perspectives, run by meteorologist Daniel Swain. Posting once or twice a month, Swain focuses on current and upcoming weather events and conditions. He delves into meteorological complexities but writes in an accessible manner that can be easily understood by non-specialists. More important for the concerns of GeoCurrents, Swain’s posts are always illustrated with informative and often striking maps. For those who appreciate the aesthetic properties of cartography, it can be difficult to beat meteorological mapping. I often find the patterns and colors almost mesmerizing. 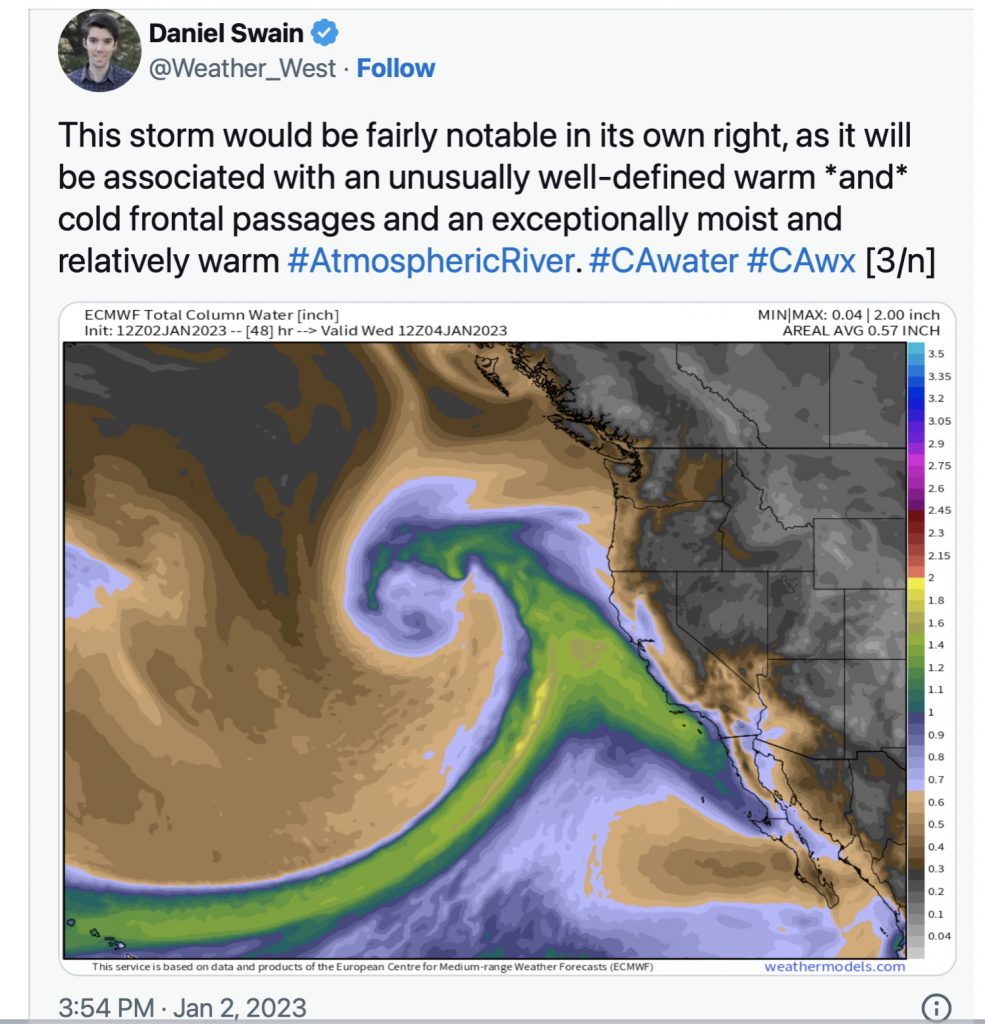 Equally impressive is Swain’s devoted readership. Each of his posts receives thousands of comments. Many are deeply informed, and they are also often illustrated with useful maps and dramatic photographs. For weather enthusiasts such as myself, the cloudscapes that are periodically posted on Weather West are reason enough to follow the blog.

What I most appreciate about the Weather West community, however, is its idiosyncratic perspective on precipitation. Here we find a group of devoted people who love rain and fully understand just how essential it is. Given California’s seemingly interminable drought – 10 of the past 12 years have been dry, the last two exceedingly so – one might expect this attitude to be common in the state, but in my experience it remains rare. Even National Weather Service (NWS) forecasters in California sometimes write about the “threat of rain” during times of dire drought. A few years back I was so frustrated by such mindless wording that I wrote a letter to the NWS urging them to replace “threat” with “promise” under drought conditions. I was surprised to receive a reply, but it turned out to be defensive and entirely non-apologetic. But some people understand. The best birthday present I ever received was a CD put together by my wife filled with rain-positive song in many genres and from several countries. One of the most memorable was Luke Bryan’s raunchy country tune called “Rain Is a Good Thing.” As Bryan emphasizes, farmers certainly understand. As his song opens:

My daddy spent his life lookin’ up at the sky

It clouds up in the city, the weather man complains

But where I come from, rain is a good thing

When rain does come to California, the Weather West community exults. They post their own precipitation numbers with pride, and bitterly complain when their own locations are stinted, ending up in the dreaded “donut hole.”  Some tend toward pessimism and sometimes find themselves gently chided by those more hopeful about coming storms. Overall, they seek to teach and inform each other, and thus form a model blog-focused community. (“Model” is used as something of a pun here, as Weather West readers often urge each other to beware of “model riding,” or giving too much credence to particular meteorological model outputs. This is especially the case when the output in question refer to “fantasyland,” or the time beyond the period of relatively reliable forecasting.) 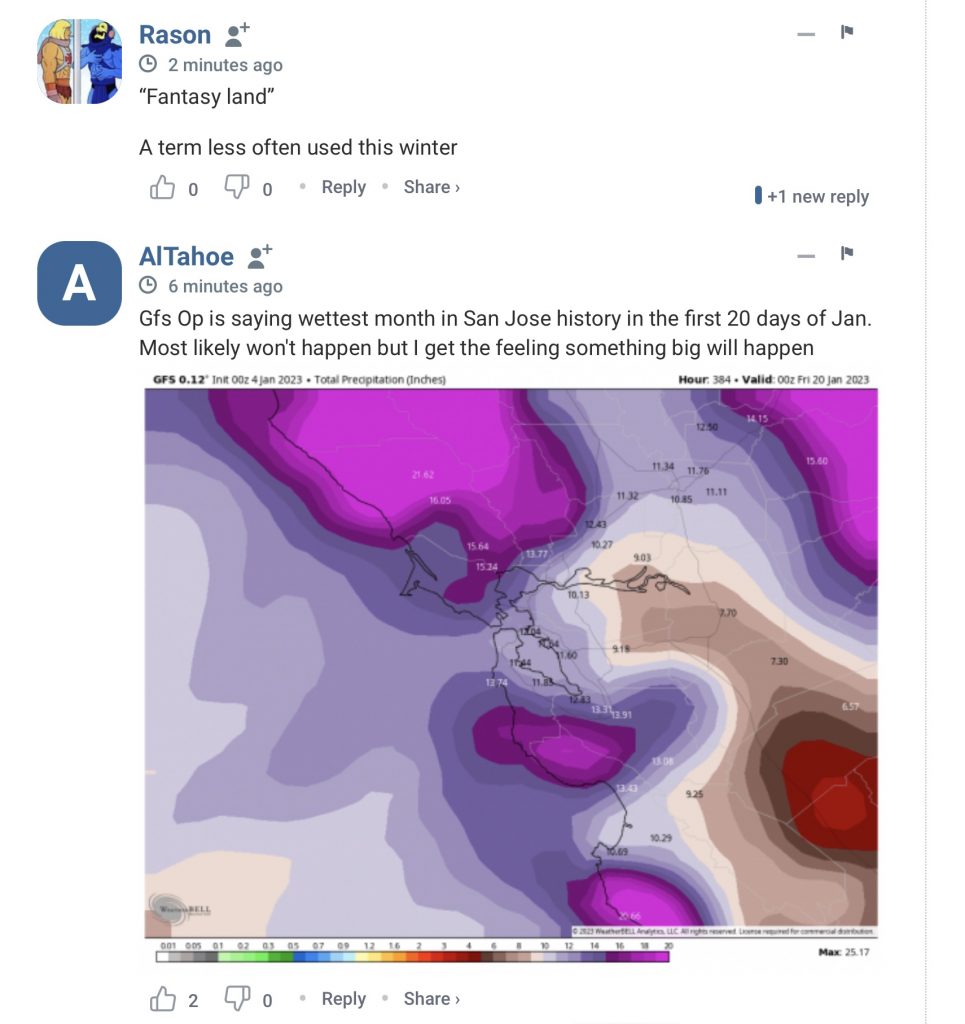 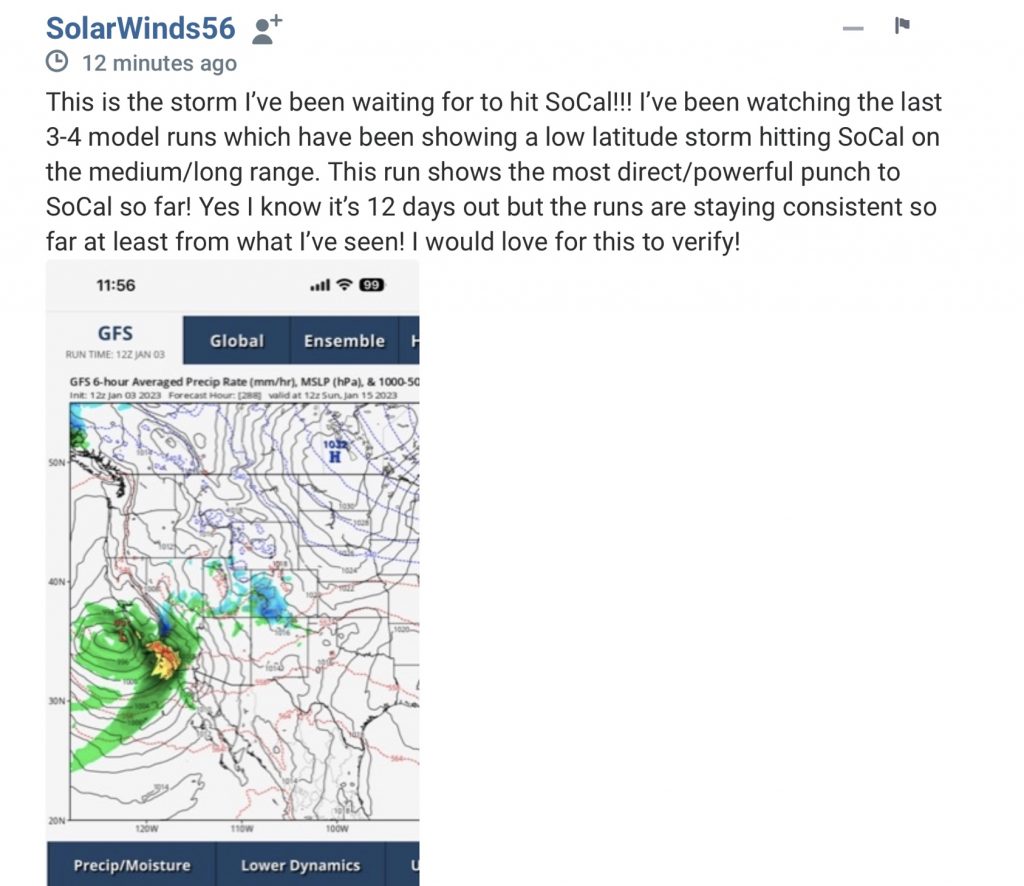 Currently, the Weather West community it very excited but also worried. California’s long-term drought has just broken, at least temporarily. December precipitation was pronounced over almost the entire state, and January looks to be wetter still. Swain’s most recent post, of January the 2nd, is titled “Major Norcal Storm Wed.; Potential High-Impact Storm/Flood Pattern to Continue for 10 Plus Day. Wet Antecedent Conditions Set Stage for Future Flood Risk.” Even the blog’s most rain-besotted commentators are now concerned that they may get too much of a good thing. Some are even sheepishly admitting that they are now hoping for a mid-winter ridge that would produce a spell of dry weather. 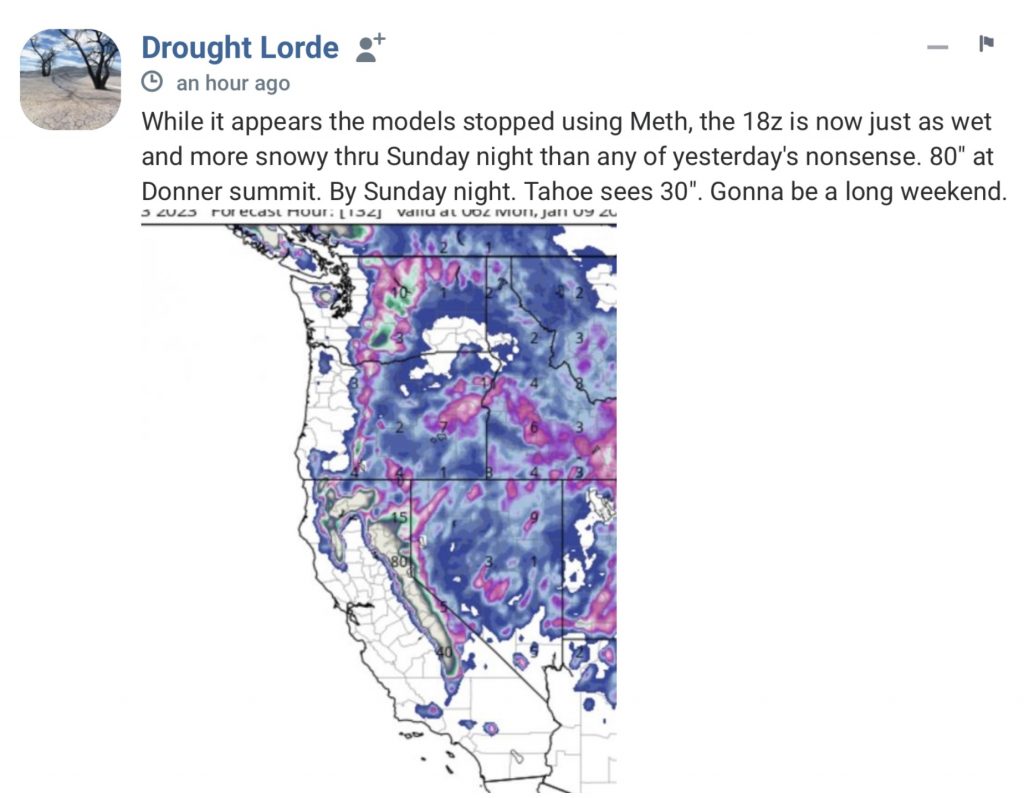 California’s abrupt transition from dry to wet this winter was not expected. Until quite recently, mid- and long-range models predicted yet another rainy season of little rain. As almost all the state’s precipitation falls between November and March, this is a crucial matter. Driving these dry forecasts was the fact that the Pacific Ocean is still in La Niña* conditions, which have persisted for the past two years. In La Niña winters, far Northern California often gets ample precipitation, but the rest of the state is generally dry. In these years, the jet stream is typically displaced to the north and must ride over a large high-pressure ridge somewhere in the eastern Pacific. If the ridge is displaced too far to the east, California is hard hit by drought. If the high-pressure zone is instead pushed westward, cold storms can ride over the ridge and produce moderate rain and decent amounts of mountain snow. Under the contrasting El Niño** regime, a different winter pattern typically prevails, with the jet stream ripping directly across the Pacific. El Niño years usually bring abundant precipitation, especially to Central and Southern California. What makes the current situation so unusual and perhaps even inexplicable is that California is now experiencing an El Niño pattern in a La Niña year, with one relatively warm storm after another lined up across the Pacific. Meteorologists are trying to figure out what is going on, and undoubtedly much more will be written on the subject. 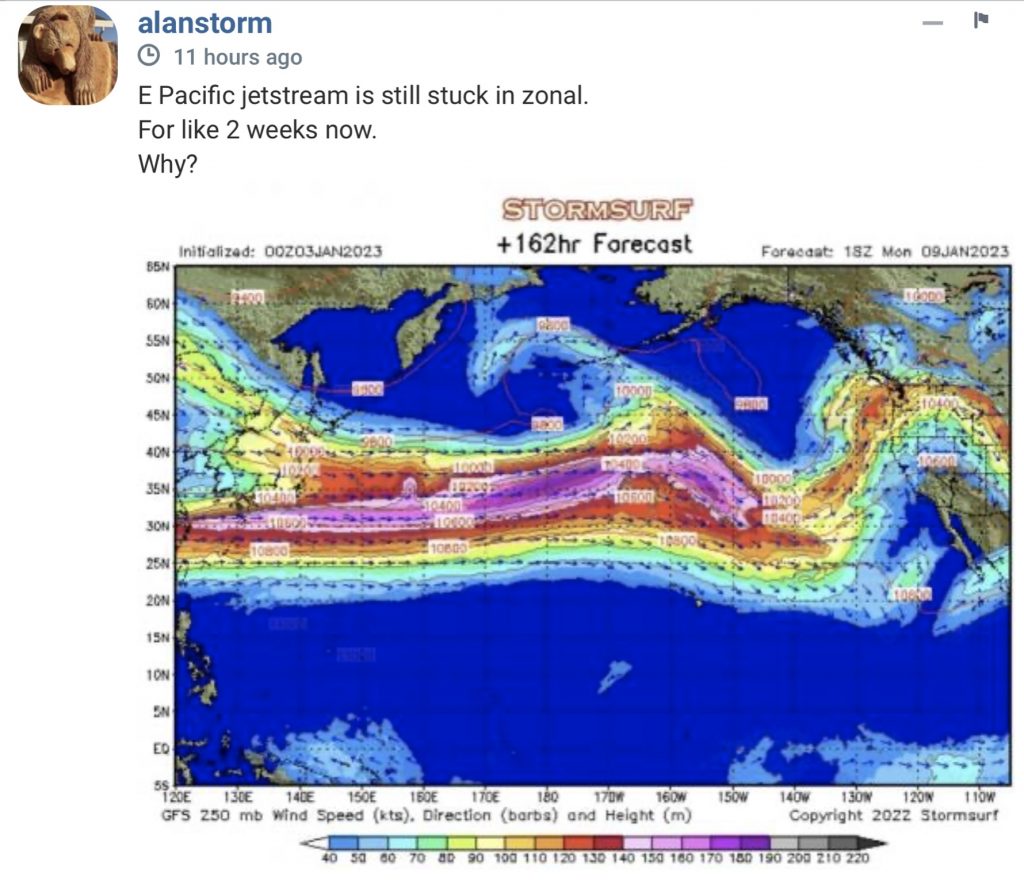 If the current forecasts through January pan out, California could end up with full reservoirs and a very healthy snowpack in the higher elevations. But that does not mean that drought conditions will not necessarily return before the wet season ends. Last year, heavy precipitation in December was followed by a parched period stretching from January through March, generally the wettest time of the year. By the end of the summer, the state’s crucial reservoirs were frighteningly depleted.

But even if this February and March are dry, fears of a disastrously water-short summer of 2023 are currently being washed away. Indication for the 2023-2024 wet season also look promising, as La Niña is dissipating and El Niño looks like it might return. But El Niño sometimes fails to produce the predicted downpours, as was the case in the winter of 2015-2016. As U.C. San Diego Scripps Institute of Oceanography reported:

Most long-range forecast models predicted a potentially drought-ending deluge in California from the climate pattern known as El Niño in winter 2015-16, but the actual precipitation was far less than expected. … “Comparing this El Niño to previous strong El Niños, we found big differences in the atmospheric response across the globe, including California,” said Nick Siler, lead author of the study that was published in the Journal of Climate, and a postdoctoral scholar in the research group of co-author Shang-Ping Xie at Scripps. “We found that these differences weren’t all random, but rather were caused by tropical sea-surface temperature anomalies unrelated to El Niño.” … The results of the study suggest that El Niño events might not have as strong an influence on California precipitation as previously thought. They also suggest that recent warming might have had a hand in making El Niño drier. The Indian Ocean is known to be warming faster than other ocean basins

Climate change seems to be intensifying California droughts, just as it might be undermining El Niño rains. But it might also be making wet periods wetter, particularly those produced by so-called atmospheric rivers. As a result, the chances of a devastating “arc storm” are increasing. As we shall see in tomorrow’s post, Daniel Swain is one of the leading experts on this topic.

*Wikipedia Definition: “During a La Niña period, the sea surface temperature across the eastern equatorial part of the central Pacific Ocean will be lower than normal by 3–5 °C (5.4–9 °F). 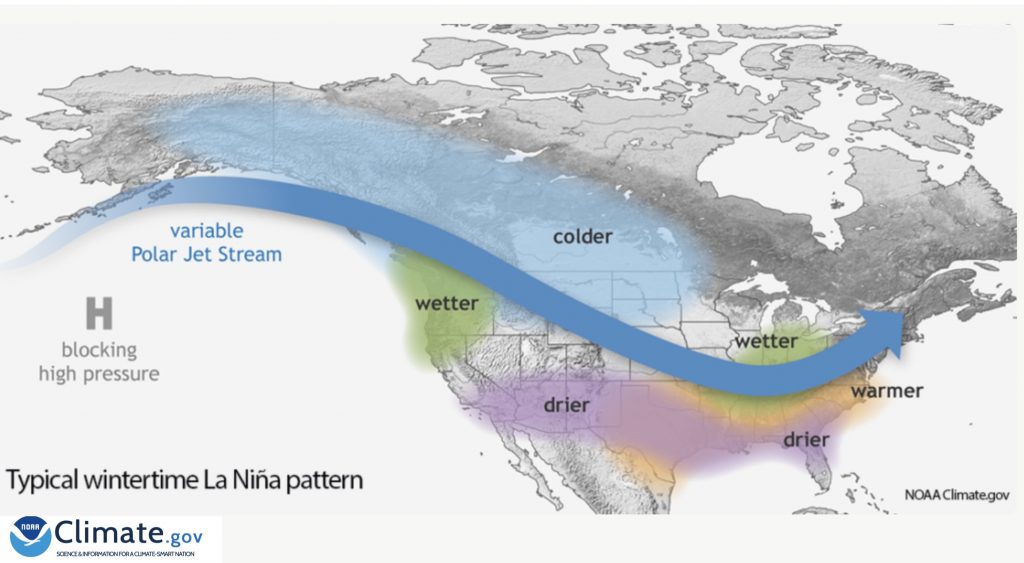 **Wikipedia definition: “[El Niño] is the warm phase of the El Niño–Southern Oscillation (ENSO) and is associated with a band of warm ocean water that develops in the central and east-central equatorial Pacific. 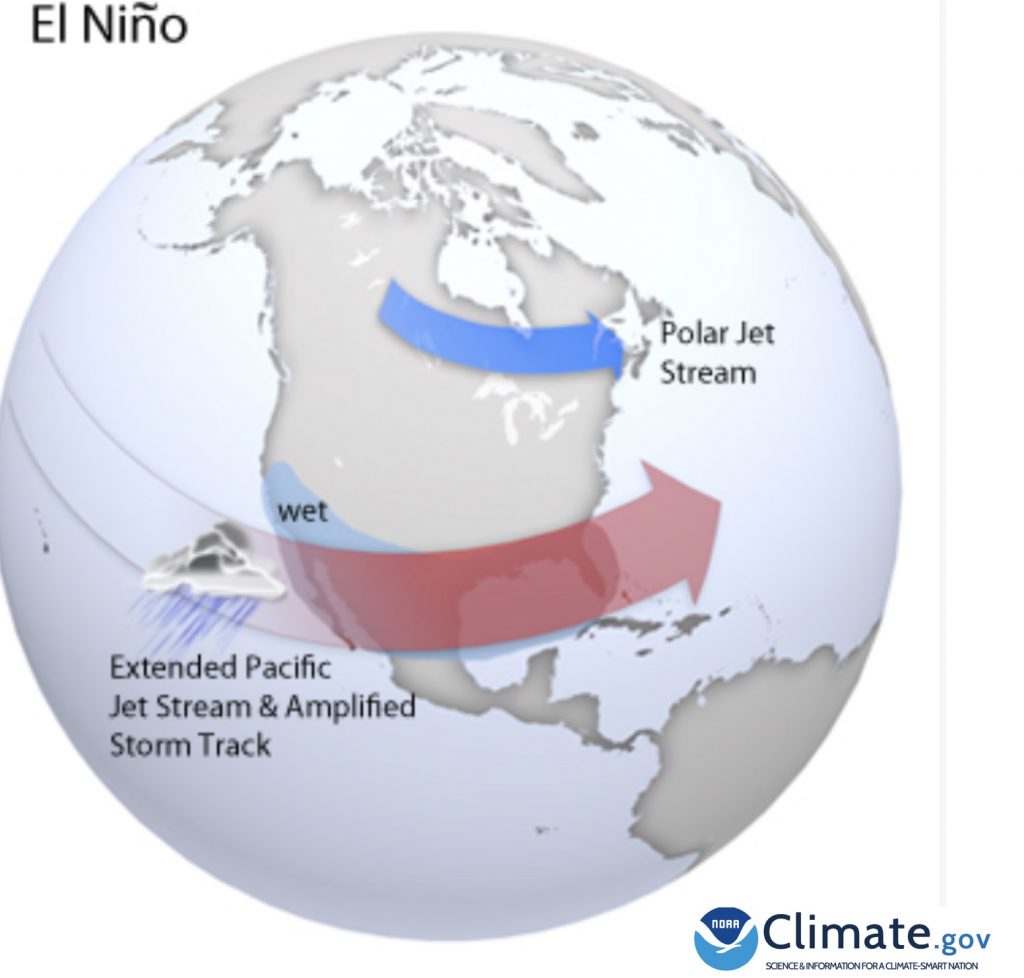