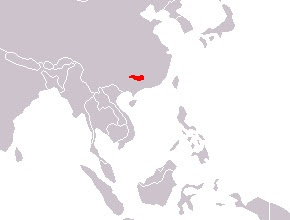 On December 22, 2009, the BBC reported that a Chinese man was sentenced to twelve years in prison for killing and eating an Indochinese tiger, perhaps the last of its kind living in China. The man, Kang Wannian, claimed that the tiger had attacked him while he was gathering freshwater clams in a nature reserve near China’s border with Laos. Four other men were sentenced to shorter terms in jail for sharing in the tiger meal and for covering up the crime.

While the Indochinese subspecies of tiger is now perhaps gone from China, an estimated 1,800 still roam the forests of mainland Southeast Asia. Far more rare is the South China tiger, whose meager remaining range is located farther to the east (see map). It is thought that this subspecies, the “stem” tiger from other populations evolved, numbers fewer than twenty in the wild. China is supporting a captive breeding program in South Africa (of all places), and hopes eventually to release new populations of South China tigers into the wild. 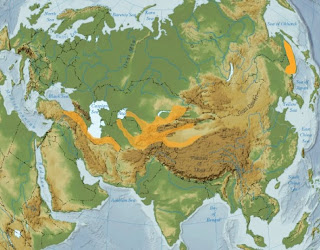 The South China tiger is fortunate when compared with the extinct Caspian tiger, the last of which was supposedly killed in the late 1950s. This cat once inhabited forests in the highlands of Central Asia and the Caucasus, as well as thickets that once lined the rivers that flowed out of these mountains into the Central Asian deserts (see map).

Genetic studies conducted in 2009, however, showed that the Caspian tiger was genetically identical with the Siberian tiger, which today numbers roughly 500 in the wild. The Siberian tiger, the world’s largest cat, is a formidable predator indeed. It is estimated that up to eight percent of its diet is bear meat. Some tigers reportedly imitate bear calls in order to attract and then ambush them.

In early 2010, Russian and Iranian scientists announced a joint plan to reestablish the Siberian/Caspian tiger in the mountains of northern Iran. Iran also pledged to help Russia return the Asiatic cheetah to the dry plains around the Caspian Sea. Iran itself, however, only holds some 40 to 50 wild cheetahs, which roam the periphery of its central desert, the Dasht-e-Kavir. India also hopes to return the Asiatic cheetah to several of its national parks.

It is perhaps odd to think of cheetahs in Russia, or of tigers in Iran, but that is only because both animals have been exterminated from most of their natural range by human activity. The Asiatic lion once lived through much of the same region, but the last lion of the Caucasus was supposedly killed in the tenth century. Today the Asiatic lion, which numbers some 350, has been reduced to one reserve in western India.