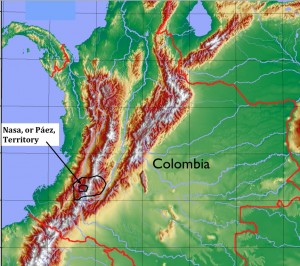 A recent article in the Chinese news site CRI notes that the indigenous Nasa people of southwestern Colombia have “lashed out at a Colombian Army outpost in southwestern Cauca province, as the military refused to leave their land as requested.” The report goes on to note that some 1,000 people surrounded a military outpost and literally tried to drag the soldiers away. As reported elsewhere, Colombian riot police soon evicted the Nasa demonstrators, and later shot and killed a member of the movement who allegedly refused to stop at an armed checkpoint.

Other articles on the conflict provide a more nuanced understanding. As the Washington Post reported, the Nasa are simultaneously taking on the Colombian military and the leftist guerillas that form the army’s main target in the region. According to the Post, indigenous leaders have vowed to “put on trial before tribal elders four alleged leftist rebels they accuse of attacks on civilians.” As the article goes on to note, the “Nasa say they are fed up with being in the crossfire of Colombia’s long-running conflict.”

Nasa leaders frame their actions in non-violent terms. As stated on a website run by the indigenous peoples of the region:

No vamos a agredir a nadie, pero utilizaremos la fuerza de nuestra comunidad reunida, de nuestra palabra y de nuestros derechos para recuperar nuestros territorios.  (We will not attack anyone, but we will use the strength of our united community, our speech and our rights to reclaim our territories.)

The Wikipedia article on the Nasa (found under the older term for the group, the  Páez), highlights as well their non-violent orientation. It also notes, however, that “they have about 7000 men and women who stand guard in their territory armed with nothing but ceremonial three-foot batons. They persuade the fighting forces of both sides to leave their land” (in light of the recent reports, however, the more accurate wording would be “try to persuade…”). The article also notes that while the Nasa generally avoid fighting, they do apply harsh corporeal punishments to those who break their tribal rules.

Nasa culture seems to be strongly rooted in the highlands of south-central-western Colombia. Out of a sizable ethnic population of some 140,000, an estimated 80,000 speak Páez, or Nasa Yuwe (“Nasa language”), roughly half of whom are reported to be monolingual. The language is evidently an isolate, although it may be related to several extinct tongues of the southern Colombian and northern Ecuadoran highlands. Most language maps, such as that of the Ethnologue, show the Páez speakers occupying a doughnut-shaped block of territory, in the center of which lies the lands of the Guambiano Indians.