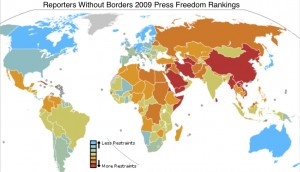 The struggle between Ethiopia and Eritrea has recently been extending well beyond the boundaries of the two countries. Ethiopia has accused Eritrea of supporting the radical Islamist group al Shabaab in Somalia, and is now pushing for stronger U.N. sanctions against the Eritrean government. Ethiopia is particularly concerned about the growing mining industry in Eritrea, which has recently attracted massive investments from such firms as Nevsun Resources Ltd. of Canada. Eritrea, for its part, has denounced Kenya and other African states for joining the struggle against al Shabaab. Although Eritrea has been viewed as increasingly isolated from the global community, it has made progress on this front, agreeing, for example, to establish diplomatic relations with Georgia in late February.

Struggles over telecommunications in the region involve a number of countries. In mid February, Lebanon condemned Ethiopia for its practice of jamming satellite television signals, a practice designed to prevent “the increasingly popular Eritrean Television from being viewed in Ethiopia,” but which also has the effect of keeping out Lebanese shows broadcast over the Saudi-based Arabsat network. Ethiopia has extensive jamming expertise, as it has also been blocking signals from Al-Jazeera Arabic, Voice of America (VOA) and Deutsche Welle (DW).

Ethiopia and especially Eritrea are generally viewed as repressive countries; Human Rights Watch has gone so far as to call Eritrea a “giant prison.” In Reporters Without Borders most recent assessment, Eritrea has the world’s most restrictive press regime, exceeding even North Korea, whereas Ethiopia ranks 127th out of 179 countries rated. The Christian Science Monitor, however, recently reported that Eritrean opposition groups have become very sophisticated in using the Internet to spread their messages. As the article notes, the sizable Eritrean diaspora has been crucial to maintaining the flow of information into the despotic country.