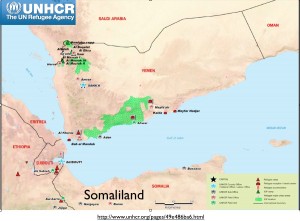 The notion of smuggling toddlers into Somalia in order to enhance their safety and increase their opportunities in life might seem utterly ludicrous, yet such an event seems to have recently occurred. According to a credible news report, nine toddlers were brought into the country from Yemen by a couple that was “apprehended … when they failed to produce proper documents for the all nine toddlers.” Several of the youngsters are believed to be the biological children of the couple in question.

The story makes sense, however, when one realizes that the children were brought into Somaliland, a relatively stable and secure country that the international community regards as an illegitimate break-away state from Somalia, a non-functioning but nonetheless officially recognized country. Also significant is the fact that the children had previously been languishing in a refugee camp in Yemen—a country currently being overwhelmed by multiple rebellions and a massive refugee crisis.

The couple in question are neither Somali nor Yemeni, but are rather Oromo, the largest ethnic group of neighboring Ethiopia. Oromia is also the site of considerable geopolitical tension, as several insurgent groups there are fighting against the Ethiopian government.