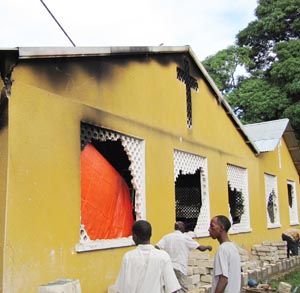 Zanzibar, a semi-autonomous island in the country of Tanzania, is still reeling from widespread rioting in late May. At that time, members of an Islamist separatist movement allegedly set fire to two churches and clashed with the police. The Zanzibar government accuses the leadership of Uamsho, or the Islamic Revival Forum, of ordering its followers into the streets to cause havoc. Uamsho leader Sheikh Farid Hadi Ahmed denies the charges and has condemned the rioting, but also insists that he will not rest until Zanzibar is liberated from Tanzanian rule. Ahmed claim to be following a peaceful path to separation, stating that “We need a referendum about the union between Tanganyika and Zanzibar. Let the people decide whether or not they need this union.”

Zanzibar’s secular government is concerned that the unrest will damage its tourism industry. Tourism is currently responsible for roughly a quarter of Zanzibar’s gross domestic product (GDP) and generates almost three quarters of its foreign currency. Some 200,000 foreign tourists visit the island each year, about 70,000 of whom are British. Officials in Zanzibar’s government were thus distressed when the “British Foreign and Commonwealth Office (FCO) issued an advisory statement, cautioning British tourists visiting Zanzibar to be cautious in the places hit by violence, telling them to keep away.” In response, the island’s President Ali Mohamed Shein intensified security and then “banned public gatherings that are bent on discussing the future of the Union, advising the people to wait for the Constitutional Review Commission which is entrusted with the task.”

Zanzibar was long linked to Oman but became a British protectorate in 1890. It was briefly an independent state in 1963 and early 1964 before joining Tanganyika to form the new republic of Tanzania. Relations between the mainland and the semi-autonomous island have long been strained. Zanzibar’s leaders stress the island’s autonomy and its status as a state, irritating Tanzania’s leadership. The resulting terminological debates can be intricate. As the Wikipedia reports, “In 2008, Tanzanian president Jakaya Kikwete tried to silence the matter when he addressed the nation in a live conference by saying that Zanzibar is a state internal but semi-state international.”

Religious tensions exacerbate Zanzibar’s problems. The island’s population is reportedly 95 Muslim and five percent Christian, and Islamist organizations are increasingly influential. Christian leaders claim that their followers are under pressure to leave the island, and they allege that plots have been established to destroy all Zanzibari churches. Islamists youths have on occasion have attacked bars, further jeopardizing the tourism economy. Under Islamist pressure, Zanzibar’s government outlawed homosexual relations in 2004. Two years later, a major controversy erupted when the Islamist group Uamsho threatened to hold massive demonstrations after rumors began to circulate that the island’s government would officially commemorate the birthday of the late Freddy Mercury, the gay leader of the British glam band Queen. Mercury was born Farrokh Bulsara to Parsi (Zoroastrian) parents in Zanzibar in 1946.