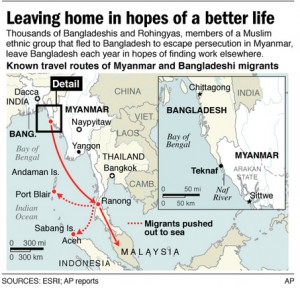 Burmese Muslim leaders were incensed not only by the actions of the mob, but also by the descriptions of the incident carried by the state-run media. In several report, the victims of the bus attack were referred to as “Kalars,” a pejorative Burmese term used for foreigners, especially those of South Asian extraction. Democracy advocates in Burma are also upset by the use of the term, which was quickly denounced by leaders of the 88 Generation Students group.

Most of the Muslims of Arakan are Rohingyas, a people of South Asian origin who speak a language closely related to Bengali. The Rohingyas of Burma have been victims of discrimination and worse for some time; a recent Times of India article describes them as “among the world’s most persecuted people,” noting that in the early 1970s they were stripped of their nationality and more than 200,000 were forced out of the country. Most of those displaced from Burma have been languishing in dismal camps in Bangladesh ever since, although many have sought refuge, often unsuccessfully, elsewhere. In 2011, however, the Burmese government agreed to begin repatriating Rohingya refugees.

Prejudice against the Rohingyas in Burma is both religions and racial in nature. Racial animosity, as well as opposition to it, can easily be gleaned from the comments posted on articles about the issue. One commentator on The Irrawaddy website, for example, opined, “Asians look like Burmese, Chinese, Thai, Japanese. These people look like middle eastern and indians. They don’t Belong in Myanmar, so GET OUT. We should have Nation wide Votes to kick them out before they convert everyone of us to Musilims” – to which the next commentator responded, “If you do not like Indian face, how would you love holy lord Buddha!!!”