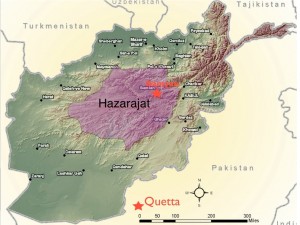 A recent UN report indicates that the Hazara people of Quetta Pakistan are living in such terror that the entire community may abandon the country. The Hazaras, Persian-speaking, Shiite group reputed to have Mongolian ancestry, are concentrated in central Afghanistan, but 6,000 to 7,000 live in Pakistan. As more than 600 have been killed since 2000, Hazara leaders in Pakistan claim that the community is facing a genocidal situation. Sunni extremists target Hazaras largely because of their faith, although their ethnic identity also is also said to play a role.

In recent years, many Pakistani Hazaras have attempted to flee to Australia.  Fifty-five perished last December, however, when the boat carrying them capsized in Indonesian waters.