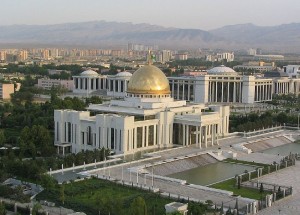 While known mostly for its isolation and repressive government, Turkmenistan has some of the largest natural gas reserves in the world. In hopes of increasing gas exports, the country will start promoting its TAPI pipeline project at international shows in London, Singapore, and New York. The pipeline will deliver gas via Afghanistan to Pakistan and India—the first letters of their names are the project’s initials—and will reduce Turkmenistan’s dependency on exports to Iran and Russia, which currently buy much of its gas. The project, in the works for over a decade, was put on hold when the United States invaded Afghanistan in 2001, and the potential for greater instability after America’s military exit has cast doubts over construction plans for the pipeline. Nevertheless, Turkmenistan plans to start supplying gas to Pakistan and India by 2016 and 2018, respectively.

Though the former Soviet republic remains diplomatically aloof, it gladly cooperates with foreign governments and companies to export its gas. Besides courting India and Pakistan, which would receive 30 billion cubic meters (bcm) of gas from TAPI yearly, it has also attracted interest from Bangladesh. The European Union is

considering Turkmen energy imports as well because it hopes to reduce dependency on Russia, which has occasionally withheld gas during disputes with Ukraine over pipeline ownership. The proposed Trans-Caspian Gas Pipeline would bypass Ukraine and Russia, bringing Europe gas from Turkmenistan and Kazakhstan. Turkmenistan already exports gas to China via the Central Asia-China pipeline and may more than double deliveries to 65 bcm to meet its trading partner’s growing energy demands.

For all its economic potential, Turkmenistan continues to have major political problems. The previous president not only aggressively quashed political opposition but also created an extravagant personality cult. Having adopted the title Türkmenbaşy (“leader of all Turkmen”), President Saparmurat Niyazov erected large golden effigies of himself across the country and promoted his autobiography Ruhnama as the nation’s spiritual guide. The current president, who is one of the pipeline’s greatest proponents, may be trying to create a personality cult of his own.

Though the United States has openly objected to the country’s human rights abuses and lack of democratic institutions, it has also shown interest in developing Turkmenistan’s natural resources and supporting the TAPI pipeline project. America’s government is concerned that Pakistan will satisfy its energy needs with natural gas from Iran, which has begun construction on its own pipeline to Pakistan and India, if the TAPI project is further delayed. As the United States has had decades-long diplomatic tensions with Iran, it finds Turkmenistan a preferable alternative energy source for Pakistan.