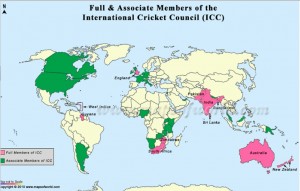 India and Pakistan have not played a cricket test series since 2007, as athletic relations between the two countries were frozen after the 2008 Mumbai terror attack. A recent geopolitical thaw, however, has led to call for resumed play, but thus far it has proved impossible to schedule a match. The Board of Control for Cricket in India recently argued that delays have stemmed from its need to gain governmental approval before anything can be set up, but the head of Pakistan’s Cricket Board responded with a taunt: “Maybe the way our team is performing and the way their team is performing in Australia, they look afraid, for them losing to Australia is not that much emotional, but its more emotional losing to Pakistan.”

Meanwhile in Pakistani cricket, the sport’s governing board announced that it will conduct an extensive “rehabilitation program” for nineteen-year-old bowler Mohammad Aamer, who was recently released from a British prison for engaging in a spot-fixing scandal. And former cricket-star turned opposition politician Imran Khan vowed recently that he would enter “reconciliatory talks” with the people of Pakistan’s rebellious Balochistan province. In Pakistan, cricket is always much more than a mere sport.