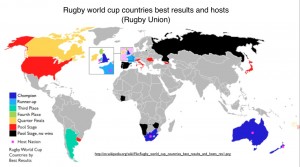 Ghana is attempting to establish the sport of rugby league both in the country and throughout West Africa, a move described as part of as “groundbreaking development initiative.” With financial backing from Europe, the project aims to educate Ghanaian youth about the sport and to set up training facilities and venues for competition, focusing initially on local universities. Rugby is played in the region, but Ghana has not done well, having been humiliated by Mali, by a score of 28 to 3, last August in the West Africa Rugby Championship tournament. (It is unclear, however, whether the tournament in question was one of rugby league or of rugby union, which are actually two different games.)

The geography of sports in an interesting topic, in part because different games spread with colonialism and commerce, but not in a predictable manner. Unlike cricket, for example, rugby never gained much support in the British Caribbean. In the same part of the world, baseball spread with U.S. influence and military intervention to the Dominican Republic, but not to Haiti.

Outside of Europe, rugby is popular in Argentina and South Africa, but it reaches its height in the greater Pacific. Australia and New Zealand are well known for their rugby prowess. As far as rugby league is concerned, no country can match Papua New Guinea (PNG) for popular support. According to a 1995 article in The Independent:

Matches in PNG are unlike any elsewhere in the world. It is not unusual for spectators in full tribal dress to walk for hours through the countryside to watch major games. When grounds cannot accommodate them, there have been near-riots by those locked out. The smell of tear gas became all too familiar during the 1990 tour.