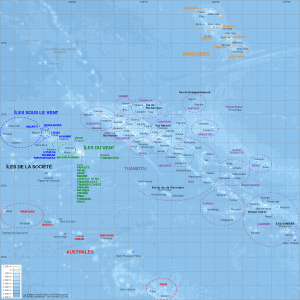 As previously noted on GeoCurrents, the political entities that comprise the French Republic exhibit a multitude of different administrative designations with varying legal responsibilities. One such possession is French Polynesia, which was officially designated an “overseas country” in 2004, though legally its status is indistinguishable from that of France’s other overseas collectivities (see map at left). Overseas collectivities yield control of foreign affairs, monetary policy, and security to Paris while otherwise exercising legal autonomy. In recent years, increasing chaos and animosity have come to define the political landscape of French Polynesia. Elected officials are split over the question of greater autonomy or independence, and legislative coalitions often prove ephemeral.

French Polynesian President Oscar Temaru is at the center of the controversy. Temaru and his pro-independence party, Tavini Huiraatira (People’s Servant), have recently stepped up their separatist rhetoric. On October 8, Temaru reportedly removed the French flag and a portrait of the French President from French Polynesia’s assembly chamber. Pro-independence members of the assembly have also begun using a Tahitian name for the territory, “Maohi Nui”, rather than “French Polynesia”. According to Temaru’s main political opponents, the anti-independence Tahoera’a Huiraatira (Popular Rally), Temaru’s actions are illegal. They further charge that he is becoming more of a dictator than a president.

Opposition to French rule is colored by a history of controversial nuclear testing. Between 1966 and 1996, 193 nuclear tests were conducted in French Polynesia. At first, such tests enjoyed a measure of support, but overtime they became an environmental scandal. France’s final series of tests, conducted in 1995 and 1996 on the French Polynesian atoll of Moruroa, provoked worldwide controversy and condemnation in the South Pacific Forum. After the last 1996 test, France signed and ratified both the Comprehensive Nuclear Test-Ban Treaty and the Treaty of Rarotonga, which creates a nuclear weapon-free zone in the Pacific. In 2006, President Temaru renamed a prominent park in Papeete—the Place Chirac—the Place de 2 Juillet 1966. The new name references the date of the first nuclear test to take place in French Polynesia, and the park now hosts a memorial dedicated to all nuclear detonation sites around the Pacific.

French Polynesia’s independence movement faces several political and economic obstacles. Aside from tourism in Tahiti, French Polynesia’s economy has little to stand on, and depends on roughly a billion of dollars in annual subsidy from Metropolitan France to maintain its standard of living. Politically, conservative parties within French Polynesia that oppose independence consistently control about half of the government’s elected positions, including—at times—the presidency. Tahoera’a Huiraatira, founded by Gaston Flosse, is the largest such party and garners the support of most French settlers. The peculiar instability of French Polynesian politics further confounds the situation. The former Tahoera’a Huiraatira President, Gaston Tong Sang, fell to a contentious no-confidence vote in 2006, paving the way for President Temaru’s ascendancy and splitting the anti-independence Tahoera’a Huiraatira into two competing parties. Though independence is certainly one of the largest issues in French Polynesian politics, it would be a mistake to interpret each parliamentary election as something approaching a referendum on the subject.

Temaru and other independence-seekers within Tavini Huiraatira point with hope to recent comments made by French President Francois Hollande during a visit to Senegal. Hollande promised an end to “Françafrique”, a term used to refer to France’s special relationship with its former African colonies. Tavini Huiraatira’s hopes may be somewhat overstated, especially given that the demise of Francafrique is itself a nebulous notion. For the near future, French Polynesia will almost certainly continue on with the status quo, and there are currently no plans for a independence referendum, as is the case in New Caledonia. In the longer term, though, an independent French Polynesia appears to be quite possible, perhaps even likely.