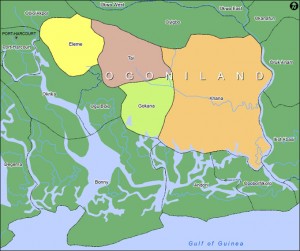 In recent months, relations between the Ogoni people of Rivers State in southeastern Nigeria and the government have come under intense pressure (map at left from the UN). On August 2nd, a group of Ogoni led by Goodluck Diigbo of the pro-autonomy Movement for the Survival of the Ogoni People (MOSOP) declared their sovereignty in internal affairs while stopping short of secession. According to allAfrica.com, the declaration asserted “political control of Ogoni affairs by Ogoni people, control and use of Ogoni economic resources for Ogoni development, adequate and direct representation as of right for Ogoni people in all Nigerian national institutions, and the right to protect the Ogoni environment and ecology from further degradation.” The governor of Rivers State attacked the declaration as “treasonous”, maintaining that Diigbo and his followers do not represent the wishes of most Ogonis. In the intervening months, confusion has reigned, with the government trying to ignore the issue and keep it from escalating, while different groups of Ogonis make different demands.

Suspicion has plagued the relationship between Nigeria and the Ogoni since the early 1990s, when the MOSOP’s creation of an “Ogoni Bill of Rights”, the outbreak of a protest movement, and several assassination attempts targeting Diigbo helped create a crisis situation. In 1993, MOSOP and the Ogoni took on Shell Oil, demanding billions of dollars and a stop to pollution in the area. After a Shell employee was beaten, the company withdrew from the region, prompting Nigeria to take heavy-handed measures to quell the resistance, resulting in around forty deaths. Ogoni antipathy to the national government intensified in 1995, when the military government of Sani Abacha hanged the noted Ogoni activist, novelist, and television producer Ken Saro-Wiwa.

Environmental damage due to petroleum exploitation has remained a huge stumbling block in negotiationsbetween Ogoni activists and the government. According to a UN report, roughly 1,000 square kilometers of Ogoniland are contaminated by oil, and clean drinking water is nearly impossible to find.  Ogonis can’t help but be exposed to petroleum toxins through a number of channels. The same report outlines cleanup strategies, but emphasizes that any such efforts would take decades and cost billions. The Ogoni obviously bear the brunt of local environmental damage, but they see few of the benefits, most of which accrue to Nigeria’s central government and Shell Oil. As seen in the August declaration of autonomy, the Ogoni want to keep oil royalties for themselves and to force Shell to either extract oil in a more responsible way or leave.  The Nigerian government, however, has a clear economic incentive to maintain the status quo.

The Ogoni do not necessarily agree about what kind of future they want for their region. Some favor complete independence, though most see that as unrealistic and undesirable. Others, such as senator Magnus Abe, would like to see the creation of a new “Bori State”, ahomeland for the Ogoni and several other ethnic groups. According to Abe, “State creation has been a major tool for enhancing a sense of belonging and promoting development by groups that feel marginalized. It is an important means of strengthening federalism, though; economic viability should also be an important criterion.” A pro-unity faction led by an ad-hoc group of politicians, community leaders, and scholars has also emerged, claiming that the “Ogoni remains committed to the unity of the Nigerian state and that we are with Nigeria, which is contrary to recent media report on Ogoni.” The group’s conciliatory stance is aimed at creating a stable situation that would allow environmental cleanup to proceed. Meanwhile, MOSOP seems to be following up on its claims to Ogoni autonomy, ordering a Mexican firm recruited by the River State government to aid banana producers to stay out of Ogoniland. Which of these groups, if any, will emerge as the dominant voice of Ogoniland, and what the government will do about it, remain open questions.