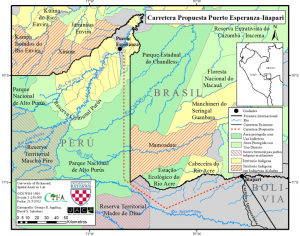 The Peruvian Amazon, along with adjacent land in Brazil, is home to some of the most isolated territory in the world. The region’s extreme remoteness poses a daunting challenge for its residents, many of whom are forced to pay high prices for food and fuel arriving by plane. With these concerns in mind, an Italian missionary, Miguel Piovesan, has led a campaign to construct a new, 125-mile road along the Brazilian border from Puerto Esparanza in northern Ucayali region to Iñapari in the Madre de Dios region (see map at left). Largely thanks to Piovesan’s eight years of lobbying, carried out in part on his own radio station, the road has gone from a figment of his imagination to a popular cause endorsed by local mestizos. A decision on the will soon be reached by Peru’s National Congress.

The road has encountered fierce opposition from environmental organizations and indigenous leaders worried that it will foster illegal logging and endanger the several uncontacted tribes. About sixty miles of the road would run through Peru’s Alto Purús National Park, which has long been a safe haven for the Mashco-Piro, Yaminahua, and Chitonahua tribes. Opponents of development in the region often argue that an end to isolation would amount to ethnocide—the destruction of indigenous culture—and can also point to several more prosaic reasons for outsiders to be wary of contact. Nomadic tribes in the western Amazon lack resistance to many diseases like influenza and measles, and would likely face high death rates if illnesses and even death if such infections were to spread among them. Violence can also be a problem in contact zones. Earlier this year, the Mashco-Piro killed a man named Shaco Flores who had acted as an intermediary between the tribe and the outside world. Flores could speak a rudimentary version of the Mashco-Piro language and had helped members of the group acquire goods like pots and machetes before being told to stop by Peruvian authorities. The motive behind his murder is a mystery; some speculate that it was done out of a desire to avoid further contact with the outside, others as retaliation for his compliance with orders to cease trading with the tribe. 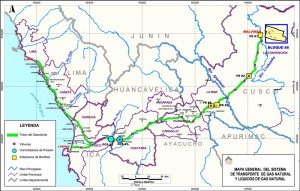 Map of the main pipeline used to transport gas extracted by the Camisea Project. (source)

Elsewhere in the region, the Camisea Gas Project, a collaboration between several natural gas extractors, presents another potential conflict between tribes and the outside world. According to the indigenous-rights group Survival International, “the gas projects threaten tribes and wildlife by physically cutting into their land, displacing communities and driving them away from their forest homes”. In regard to the Camisea Project, however, such warnings may be exaggerated. Though the project organizers acknowledges the presence of both contacted and uncontacted tribes near the work area, they claim to respect the property of all indigenous people and stress that contact with otherwise isolated tribes will continue to be avoided. Opponents of Camisea remain unconvinced, wondering how uncontacted tribes could possibly consent to gas extraction activity. Survival International has stepped up its publicity campaign against Camisea by appealing to the one million annual visitors to nearby Manchu Pichu.

Managing the environmentally sensitive areas around traditionally isolated tribes continues to be a difficult dance. While illegal logging, virgin soil epidemics, and violence all argue against an outside presence, perpetual isolation may prove an impossible goal.