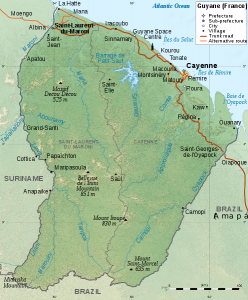 Although Brazil has received ample press attention in its scramble to prepare for the 2014 World Cup and 2016 Olympic games, its neighbor French Guiana has also started drawing up plans to host athletes competing in the two sporting events. The overseas region of France will expand its sport, tourism, and transportation infrastructure in order to attract elite athletes to train there for the games. Earlier this month in London, the government-sponsored group GIP Guiana 2014-2016 promoted the region as a convenient, safe, and scenic place for foreign teams to train away from the hustle and bustle of the main competition venues.

The French government will spend about €35 million ($43 million) over the coming three years on projects that will include the renovation of two soccer stadiums in Rémire-Montjoly and Kourou, as well as the construction of new sports facilities. Future high-end training centers will include an Olympic-grade running track, a swimming pool, and a gym for martial arts, which together would accommodate athletes competing in up to 20 different Olympic events. In addition to a new transport system, French Guiana will also build new hotels, with a capacity of up to 4,000 visitors.

Government officials hope that these activities will boost the economy of French Guiana, which like the Caribbean islands of Guadeloupe and Martinique and the African island of Mayotte, is considered an integral part of the country of France. The construction jobs and tourism that the project will generate should reduce the region’s unemployment rate of about 20 percent. After the next Olympics, the new stadiums would provide a venue for the cultivation of sports talent in French Guiana, which has a youthful population and many cultural affinities with the Caribbean. Even though the region is considered politically equal to any other in the country—it sends representatives to the French legislature and is part of the EU and Eurozone—it has a much lower standard of living than metropolitan (European) France. While the highest in South America, French Guiana’s GDP per capita is slightly less than half the national average, and the economy is highly dependent on government subsidies and the presence of the European Space Agency’s spaceport.

The effort so far has been promising. Twelve countries are already considering using the country’s facilities, and GIP Guiana 2014-2016 has received advice from the London Olympic authorities about planning for the infrastructural challenges of hosting thousands of athletes and their coaches.