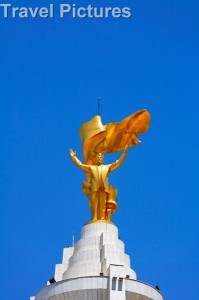 The death of Turkmenistan’s president Saparmurat Niyazov in 2007 was widely viewed as a boon for his country but a loss for comedians worldwide. Niyazov, or “Turkmenbashi” (Leader of the Turkmens) had constructed a personality cult so lavish that it verged on self-parody. He put up a massive gold-plated statute of himself in Ashgabat that rotated 360 degrees during the course of the day so that it would always face the sun, and he renamed the months and the days of the week after his heroes, his family members, and himself (thus January became “Türkmenbaşy”). All students in the country were required to study Niyazov’s book, the Ruhnama (Book of the Soul), in great depth. Lack of familiarity with its contents could cause someone to lose his or her job.

When Gurbanguly Berdymukhammedov assumed the presidency on Niyazov’s death, many observers thought Turkmenistan would become a more normal country. The signs were encouraging at first; statues came down, the names of the months were restored, and shuttered schools and hospitals were reopened. But over the past few years, Turkmenistan has returned to its old ways. In the presidential election of February 12, 2012, Berdymukhammedov, a former professor of dentistry, received 97 percent of the vote, an impossibly large margin in a truly democratic election. He is also busily constructing his own personality cult. He is now officially called “Arkadag” (the Protector), and he is supposedly writing his own spiritual guide for the nation, to be called either Turkmennama (Book for Turkmens) or Adamnama (Book for Humanity). Villages, streets, and buildings are being renamed for his relatives, and a more specific cult is being developed around the his favorite horse breed, the Akhal-Teke.  Although the breed is noted for its toughness, it also suffers from a large array of genetic abnormalities.