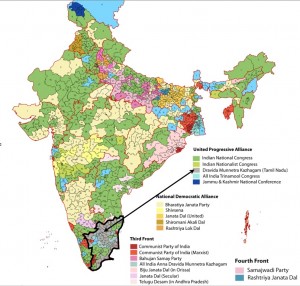 Tamil Nadu, a populous and increasingly successful state, stands apart on the Indian electoral map, as its politics have long been dominated by Dravidianist parties focused on the distinction between Dravidian-speakers of southern India from Indo-European-speakers of the north. The original Dravidian movement was leftist if not explicitly communist, and was both anti-religious and anti-Brahmin. The movement has long since splintered into rival political parties, but a populist strand remains prominent. Yet the nationalist and racialist rhetoric of the Dravidianists speaks to an affiliation with the ideas of the extreme right. At the same time, the movement has generated pragmatic and developmentalist policies, and is essentially moderate in several respects. Rather than advocating Dravidian separation from India, the modern Dravidianists merely push for state-level nationalism for Tamil Nadu within India as it currently exists.

These seemingly contradictory tendencies are embodied in the person of M. K. Stalin (Muthuvel Karunanidhi Stalin), treasurer and would-be leader of the locally powerful Dravida Munnetra Kazhagam political party—sometimes described as “Tamil Nadu’s sensation.” Stalin was indeed named for the Soviet dictator, and he too proudly calls himself the “man of steel.” Like his namesake, he has been arrested on multiple occasions, although his supporters claim that he has been the victim of political vendettas. His actions are often controversial, and are discussed at great length in the Tamil news. A February 7, 2012 article, for example, focuses on Stalin’s recent exhortation of the youth of the state to cultivate their “love for the mother tongue and the Tamil race.”

Stalin’s comments about “the mother tongue” reflect anxieties about the Tamil language, described by the Wikipedia as “one of the longest surviving classical languages in the world.” Spoken Tamil is not fully standardized, as is quite distinct from formal, written Tamil. Many people in the state have difficulty understanding the written version, yet rules for writing colloquial Tamil have not been standardized. Efforts have been made by Dravidianists to strip out Sanskrit words and influences, generating uncertainty and controversy. Not surprisingly, many young Tamils prefer English for written communication. As Sreedhar Pillai colorfully puts it, “Jayalalitha, the chief minister of the Indian state of Tamil Nadu, whose delirium tremens and tantrums have become a part of the new X factor politics destroying India, has issued in true Taliban style, a diktat that all children in her state must learn Tamil!”