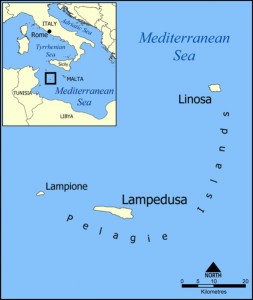 The Italian island of Lampedusa is well known as a place of entry into the European Union for would-be immigrants from Africa. Less commonly noted is the fact that Lampedusa’s neighbors in the Pelagie Archipelago are in the same situation. Earlier this week, for example, 78 Somalis (15 women and 63 men) landed on the island of Linosa (5.45 km²; population 450), where they were immediately detained by the Carabinieri, Italy’s national police force. Migrants are often in dire conditions when they arrive. Earlier this month, 48 people on a rubber dinghy were rescued near Lampedusa; over the previous several days, 10 had reportedly died, their bodies dumped into the sea.

The Pelagie Islands are not only a common entry point into Europe, but the archipelago also serve as a place of detention for illegal immigrants. The main holding site is the euphemistically named Lampedusa Immigrants Reception Center. As the Wikipedia describes the facility: “The unit, which was originally built for a maximum capacity of 850 people, was reported to be housing nearly 2,000 boat people. A significant number of people were sleeping outdoors under plastic sheeting.”