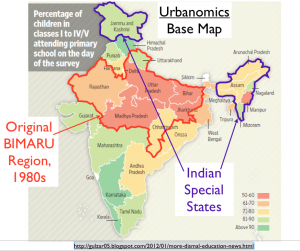 The Indian state of Bihar has long been noted for its poverty, corruption, and lack of social progress, ranking last in most Indian developmental indicators. But Bihar now has one of India’s fastest growing economies, and its levels of corruption have recently plummeted. Less pronounced gains have also been made over much of northern India. As a result, the impoverished BIMARU region (BIhar, MAdhya Pradesh, Rajasthan, and Uttar Pradesh) is now considered to be defunct.*

Despite its recent gains, Bihar is still one of the poorest parts of India, with low levels of social development (as can be seen on the Urbanomics base map used here). Its popular Chief Minister, Nitish Kumar, trumpets Bihar’s recent gains, yet he insists that his state’s poverty makes it eligible for “special category” status, which would allow it to receive financial benefits from the central government. Kumar recently rallied his massed supporters by declaring that, “We are prepared for a longer battle ahead. We will now organise a rally in the national capital, sometime in March, to press for the acceptance of the special category status demand.” Kumar’s call has attracted widespread attention across India, in part because he would also like to see such “special category” status applied to other backward Indian states.

To qualify for the category, Indian states must fit several criteria based more on physical geography and culture than on poverty and lack of infrastructure. Rough topography, substantial tribal populations, and low population density are the key factors. Bihar, in contrast, is a densely populated lowland state with few tribal people. Kumar, however, waves away such obstacles, arguing that the problems of the uplands spill into the plains of Bihar: “Though Bihar is not a hill state, the river emanating from the mighty Himalayas is creating havoc in the state through flood every year…It is the responsibility of the Centre to talk to Nepal to find a solution to recurring floods. It has failed to fulfill its responsibility.”

The Times of India contends that Kumar’s approach is “arousing sub-nationalism” among the Bihari people, which it sees as a basically positive development, arguing that sub-nationalism can generate the social cohesion necessary for economic growth. Elsewhere in India, however, Bihari assertiveness is often regarded with contempt and suspicion, as are Biharis. As the Times of India reported in September of this year:

Bihar is on the receiving end once again in Mumbai. Biharis have been termed “infiltrators” — and to hear the words of a self-appointed guardian of Marathi sub-nationalism in Mumbai, the most cosmopolitan city in India, they might be run out of the state.

Bihar-bashing has become MNS chief Raj Thackeray’s favourite pastime in recent years. In the process of espousing a grotesque form of sub-national regional and linguistic fundamentalism, he has acquired a larger than life image such that the governance of the city appears to be ‘outsourced’ to him.

*It should also be noted that the geographical designation of BIMARU changed at the beginning of the new millennium when the new states of Jharkhand, Chhattisgarh, and Uttarakhand were hived off of Bihar, Madhya Pradesh, and Uttar Pradesh respectively.

** The designation of special category states on the map posted here is not definitive; I was not able to find a map showing the states so designated, and different textual sources place different states in the category. Some sources, for example, list Sikkim and Uttarakhand as well.