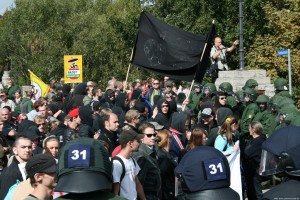 Although Germany is far more politically stable than it has been over much of the past century, it has recently experienced a rise in crimes linked to radical politics. According to a government investigation , the number of reported criminal extremist activities increased from last year by 3.8 percent to 21,610. Though domestic Islamic extremism poses the greatest threat and receives ample media coverage, neo-Nazi and revolutionary communist violence, which gets much less press attention, has become a growing problem. Neo-Nazis direct the majority of their attacks against immigrants, and communists direct most of theirs against police officers. Both groups also target each other.

Germany’s far right owes much of its ideology to the Third Reich, but it has thrived and evolved because of current economic dissatisfaction and popular resentment of immigration. The most prominent neo-Nazi party, the National Democratic Party of Germany (NPD), holds seats in thirteen local parliaments and attracts at least a small following in most states. The NPD opposes immigration, capitalism, European economic and political integration, and military involvement in Afghanistan. Though it stems from the German Reich Party, which formed in the aftermath of the Second World War and was based in West Germany, the NPD has since reunification received the most votes in the states of former East Germany. Residents of eastern Germany tend to have a significantly lower standard of living than their counterparts in the west. Because of widespread economic frustrations and a hatred of foreigners, the eastern states of Saxony, Mecklenburg-Vorpommern, Thuringia, and Brandenburg lead the country in their support of the extremist right-wing party.

Though the NPD is the most visible far-right group in Germany, it by no means has a monopoly over neo-Nazism. A significant neo-Nazi subculture has formed around distinctive black attire and shaven heads, heavy metal concerts with white supremacist bands, and marches for extremist causes. Though at times peaceful, the activities of the far right can often become violent and are closely monitored by the government. The number of potentially criminal neo-Nazis rose in 2011, their violent offenses increasing by about 1.5 percent to 16,142. Again, per capita neo-Nazi violence is concentrated in eastern Germany. The region’s recent rise in violence coincided with the uncovering of the National Socialist Underground, a cell of rightists who had committed multiple murders over the course of the past decade.

Germany’s far right may be better known to the outside world, but the country’s greatest surge in political violence has been on the far left. In 2011, violent crimes by leftists increased from the previous year by 20 percent. Like their neo-Nazi counterparts, Germany’s revolutionary communists have had a relatively long history, but have altered their ambitions somewhat with the times. Today’s far left activists share the radical egalitarianism and anti-capitalism of late 20th century militant groups such as the Red Army Faction. However, their organization is less sophisticated and, instead of focusing on high-profile targets in government and industry, they mainly direct their attacks on the police and members of the far right.

The rise of leftist extremism is associated not only with the economic problems that plague the states of former East Germany, but also with gentrification and other social frustrations in urban areas. The highest concentration of violent crimes committed by communists was in major cities—Bremen, Berlin, and Hamburg—and more broadly in eastern Saxony and Mecklenburg-Vorpommern.

The troubling increase in neo-Nazi and communist violence points to lingering popular anger. German politics is nowhere near as volatile as it was in the past. However, growing economic problems in Germany and the European Union will most likely only exacerbate such frustrations.