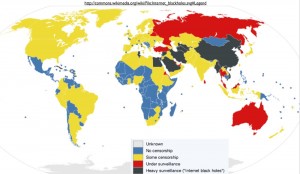 According to Lebanon’s Naharnet, Iranian authorities just unleased a sophisticated attack on internet usage. The new measures “completely stopping the use of Virtual Private Networks (VPNs),” software that has allowed millions to avoid web censorship. The new block on VPN, Naharnet claims, “appeared to be part of plans by Iran to roll out its own ‘national Internet’ — a totally closed system that would function like a sort of intranet for the Islamic republic.” 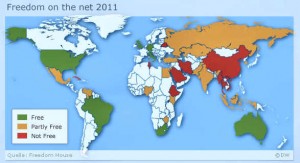 On maps of internet freedom, Iran is always placed in the lowest category. On the Wikipedia map of internet freedom posted above, the lack of restriction depicted in sub-Saharan Africa, Middle America, and ex-Yugoslavia, is rather remarkable.  Not all maps of the topic, however, show such patterns. Notice the different positions of Venezuela, Mexico, Kenya, and other countries in the two maps posted here.