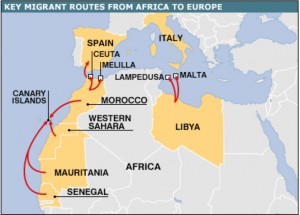 Malta has long been a major node in the movement of unlicensed migrants to Europe. Maltese authorities, however, have recently announced that that landings have essentially come to an end. They link the change to the downfall of Muammar Gaddafi in Libya. Under the Gaddafi regime, large numbers of sub-Saharan Africans moved to Libya, which for many was a stepping-stone for relocation to Europe. Sub-Saharan Africans are no longer entering Libya in significant numbers, and hence are no longer passing through Malta. As the Times of Malta reports, ” between January and June 2011 about seven boats with 1,530 irregular migrants reached Malta from Libya, [but] no arrivals were registered from July…. [while] in 2008, 2,775 migrants arrived on 84 boat landings.”