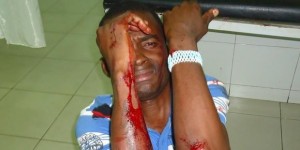 Angola is an economically booming, oil-rich country noted for its low levels of human development, authoritarian government, deep disparities of wealth, and high levels of corruption. Peaceful opposition to the government has recently been mounting, inspired in part by several politically active rap musician, most notably Hexplosivo Mental (Jeremias Augusto) and Carbono Casimiro. Earlier this week, a number of anti-government activists, including Hexplosivo Mental, “were attacked, beaten and some hospitalised during a meeting in the Angolan capital Luanda, prompting Amnesty International to call for a full and impartial investigation into the incident.”

The Portuguese-language website maintained by the rap-associated activist group, Central 7311, forwards a broadly democratic message, framing Angola as both a “country of the future” and a “country of fear.” Its manifesto denounces Angola’s “communist and autocratic … cult of personality,” while demanding a free press, freedom of expression, the separation of powers, and an autonomous legal system in which no one is above the law.

Angola’s economy has become highly globalized in recent years. Relations with China are particularly close: Angola is one of China’s top suppliers of oil, and China is currently “rebuilding of the Benguela Railway, a 840-mile transcontinental railway that links the Atlantic port of Lobito in Angola with rail networks in the DR Congo and Zambia.” But China is by no means the only foreign country interested in Angolan resources. Argentina, for example, is currently negotiating with Angola for an “oil for food” pact (Angola’s once-significant agricultural sector is now almost moribund). Economic ties with Portugal are also close—and growing closer, due to the old colonial connection, the use of a common language, and Portugal’s current economic crisis. As reported in a recent Spiegel Online article:

With the help of the state oil company Sonangol’s petrodollars, the former enslaved nation is going on a shopping spree in Portugal. The Angolan elites, many with ties to President José Eduardo dos Santos, in power for the last 32 years, are buying up Portuguese government-owned companies that have to be privatized quickly. Portugal’s conservative prime minister, Pedro Passos Coelho, spent his childhood in Angola, where his father was a doctor. This connection has prompted Coelho to advocate closer relations between the two countries, “their citizens and their companies.” Now Angolans are buying up shares in Portuguese media companies and they are purchasing prime property along the Atlantic beaches as well as luxury real estate in Lisbon and designer clothing. They are also snapping up workers. Close to 150,000 Portuguese have already obtained visas for Angola.