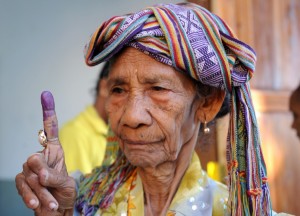 Over the last half-century, peace and stability have remained elusive goals in East Timor, officially known the Democratic Republic of Timor-Leste. Invaded by Indonesia shortly after it achieved independence from Portugal in 1975, East Timor has only been a formal country with de facto control of its borders only since 2002. On July 7, the country held its third parliamentary election that was won handily by the ruling party, the National Congress for Timorese Reconstruction. Outside observers have praised the election as relatively uncorrupt, with people walking hours in order to cast their votes. Prime Minister Xanana Gusmao announced the formation of a new cabinet on August 7th, completing the new government.

The choice of Maria Domingas Alves, previously the Minister of Social Security, for the more prestigious position as Minister of Defense and Security (the military’s top civilian overseer) proved to be the most controversial cabinet pick. President Taur Matan Ruak, who was elected as an independent candidate in April, seems to have balked at the selection of a woman, and forced the nomination of Cirilo Jose Christopher instead. Christopher’s nomination is now secure, but women’s rights groups in East Timor are furious. The Rado Feto womens’ network claims that the snubbing of Alves is a decision to “reduce the dignity of East Timorese women, and ignore women’s capacity that was well demonstrated [by Mikato] in her over five years contributing strong successes in the administration of the first coalition government.” The women of East Timor’s parliament have also expressed their anger, claiming that the President’s decision “kills the spirit of participation among women.”

President Ruak’s real name is José Maria Vasconcelos. Taur Matan Ruak is rather a nom de guerre meaning “two sharp eyes” in Tetum, an Austronesian language straddling the Indonesia/East Timor border. Having fought the Indonesian occupation of East Timor for its entire 29-year duration, Ruak remains a very popular political figure. He played a controversial role in the 2006 East Timor Crisis, a period of infighting among the military, where he distributed weapons to civilians to help back his faction, but this seems not to have damaged his political career. After a generation at the helm of East Timor’s armed forces, Ruak sees Alves as an outsider who lacks the necessary experience and pedigree, a charge deemed ridiculous by Alves’s supporters.

Adding to these tensions is East Timor’s persistent (and historically justified) fear of conflict with Indonesia. Recently a small fight broke out between Indonesian and East Timorese civilians inside the “Free Zone” that separates the two countries. Apparently, the East Timorese attempted to build a customs facility in the zone, which Indonesians attacked with rocks. An East Timorese security post suffered damage, but otherwise no one was harmed.

Allegations of presidential sexism notwithstanding, the last month has generally been regarded as a success for East Timor. With its history of war and a GDP per capita of only $1,588 in 2011 (156th in the World according to the World Bank), carrying out successful elections remains a significant accomplishment for the country.