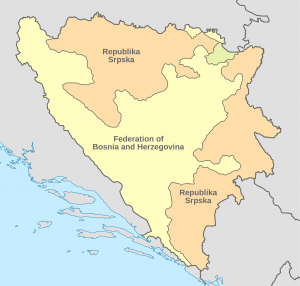 Preliminary results are in for Bosnia and Herzegovina’s October 7th local elections. The elections went smoothly and without irregularities, but many fear that the results may fan the flames of ethno-nationalism and separatism in the fragile country’s political discourse. The big winner appears to be the Serb Democratic Party (SDS), which won 27 mayoral seats for a gain of 13 from the last such elections in 2008. The SDS’s gains come within Republika Srpska, one of two mostly independent political entities that together comprise Bosnia and Herzegovina (see map at right). Ethnic Serbs dominate Republika Srpska, whereas about three quarters of the inhabitants of its confusingly named counterpart—the Federation of Bosnia and Herzegovina—are Bosniaks (Bosnian Muslims) and Bosnian Croats.

The success of the SDS has understandably raised eyebrows. SDS members played a leading role in the initiation of the 1992-1995 Bosnian War, and have since been found guilty of numerous crimes against humanity in international courts related the indiscriminate killing of Bosniaks during the war. The SDS does not currently espouse violence, but it has positioned itself to the right of the relatively moderate Alliance of Independent Social Democrats (SNSD)—the party of Republika Srpska’s president, Milorad Dodik. The SNSD was the main loser in October 7th’s elections, losing 26 mayoral positions.

Local elections in Bosnia and Herzegovina are more closely associated with national politics than in most other countries. According to Bosnian political analysts, local issues like roads and schools were mostly ignored, as candidates tended to emphasize questions of sovereignty, such as whether and how Bosnia should be divided. According to university lecturer Dražen Pehar, the local media share some of the blame, as they “simply followed the election agenda as imposed by the parties and the candidates, rather than trying to steer it towards a proper set of issues.”

Bosnia and Herzegovina’s sharp ethnic and political division means that the country essentially experienced two different elections, one in Republika Srpska and another in the Federation of Bosnia and Herzegovina. In the latter, the political landscape will remain relatively stable, with the dominant Bosniak party, the Party of Democratic Action (SDA), winning 34 mayoral seats. The Croat Democratic Union, which represents the Federation’s Croat minority, won 14 seats.

The final results of the elections remain unclear in some municipalities, most notably Srebrenica. The then-majority Bosniak Srebrenica was the scene of a notorious mass-killing in 1995, where over 8,000 Bosniaks died at the hands of Republika Srpska troops and paramilitary organizations. The killings, along with the expulsion of 25,000-30,000 other Bosniaks, were ruled a genocide by The Hague in 2004. Since the end of the war, about 10,000 Bosniaks have returned to Srebrenica, where they now constitute a one-third minority. In the past, former Bosniak residents of Srebrenica driven from the city in the 1990s have been allowed to vote in local elections, electing Bosniak mayors and councilors. Beginning with the October 7th elections, that privilege no longer applied, prompting fears that Serb politicians will take power.

Serbs see the expiration of special voting rights for Bosniak ex-Srebrenica residents as a natural step towards normalcy. Their reasoning is that local elections require local expertise among voters. According to Srebrenica’s Serb SNSD mayoral candidate, Vesna Kocevic, “the citizens who live here should decide about Srebrenica and about what happens in the community.” SNSD politicians also tend to minimize the hardships of Srebrenica’s Bosniaks; Republika Srpska’s president recently claimed at a Srebrenica campaign event that “there was no genocide.”

Srebrenica’s Bosniak mayoral candidate, Camil Durakovic, sees the new political situation as a fulfillment of exactly what the perpetrators of the 1995 killings wanted. Srebrenica’s Bosniaks have responded by encouraging Bosniaks from around the country to register and vote in Srebrenica. The outcome of their efforts is not yet clear, but it appears that the election will be close. Republika Srpska may challenge the results.