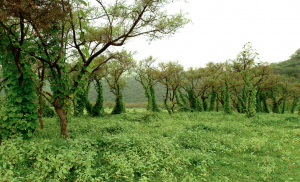 Lush, verdant hillsides are not the type of landscape one would expect to find on the Arabian Peninsula. Indeed, most of the region is parched desert where plant life is extremely sparse without human intervention. As explored previously on GeoCurrents, Oman is one of the most culturally exceptional countries in the Middle East, and its physical environment surely fits that description as well. During the summer monsoon season, parts of Oman and Yemen find themselves soaked in rain and wreathed by fog. Known as the khareef in Southern Oman, the annual rainy season creates an occasion for local celebration, draws large numbers of tourists from across the Arab world, and allows for a temporary flowering of greenery. The city of Salalah—Oman’s second largest city and the capital of the Dhofar Governate—sits at the center of the excitement.

Khareef season officially lasts from June 21 through September 21, with the most pleasant weather and largest tourist throngs usually coming in August. Most years see around 300,000 people visit Salalah and its environs during the khareef. A large majority of visitors come from other parts of Oman, yet tens of thousands also make their way from other parts of the Middle East elsewhere in Asia. Europe, the Americas, Africa, and Oceania typically send a few thousand visitors in total. This year, the timing of Ramadan delayed the tourist season, causing especially large numbers to descend on Salalah during late August. Statistics are not available, but all residential accommodations for tourists appear to be booked solid for weeks. Attractions are reportedly overcrowded, with some tourists picnicking on roadsides.

Such enthusiasm for Salalah might seem baffling at first, but the area is home to a fascinating array of flora and fauna. Arguably the most impressive is the critically endangered Arabian Leopard, which struggles to compete with pastoralists and frankincense gatherers for habitat. The region also hosts a population of Striped Hyenas, which have a much larger range outside of Oman. Bedouin tribesmen of the Arabian interior traditionally use hyena meat as ritual medicine, though it is also occasionally eaten as food. Southern Oman’s African flavor is not limited to mammals; at high elevations in the Dhofar Mountains one can find clusters of Baobab trees. The trees, with their definitive fat trunks, large size, and longevity, appear most closely related to similar trees in East Africa. It is unclear whether the groves of Dhofar represent the remnants of a formerly much larger Baobab range, or if seeds were brought to the region from Africa through trade at some point during antiquity. Either way, when the trees are paired with the lush hills of the khareef season, the uplands around Salalah look more like some strange mix of Africa and the British Isles than the Middle East.

Outside of khareef season, the coastal parts of Dhofar are relatively dry, but they still receive some moisture through the condensation of mists wafting in from the ocean. Known officially as the Arabian Peninsula coastal fog desert ecoregion, this narrow band of watered land along the coast of Saudi Arabia and Oman allows trees to flourish even where monsoon rains do not play a major role.

As alluded to above, the Salalah area provides ideal conditions for Frankincense-yielding trees, the resin of which has been an important export item since ancient times. Even in China, chroniclers knew that the inhabitants Southern Arabia’s rich mountains were the main suppliers of the pleasant-smelling resin, and trade within and between Arabia and East Africa dates back at least 5,000 years. Observers today question the future of the Frankincense trade, warning that stresses due to overharvesting could cause the number of trees to fall up to fifty percent by 2026.

As long as the monsoon rains continue to fall in the mountains of Oman, the summer will remain an exciting time for residents and visitors alike. As the Middle East continues to grow both in population and economic sophistication, tourist season in Salalah promises to get even more hectic. For those who will only know the region through their computers, Khareef season can still provide a vivid illustration of the diversity and beauty of Middle Eastern physical geography.