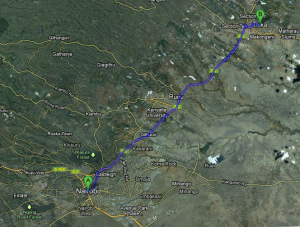 In recent years, the crippling traffic congestion around Nairobi has prompted calls for higher capacity roadways to knit the region together. Kenya’s first superhighway, which links Nariobi to the city of Thika 42 kilometers to the Northeast, was recently completed to much fanfare. Formerly a four-lane road, the route now boasts eight lanes of state of the art grade-separated highway. The project serves as a highly visible manifestation of China’s growing ties to Africa, as the Chinese firm Wu Yi Co did much of the engineering and construction work. The highway has already thoroughly transformed many of the towns along its route—some for the better, and some for the worse. Kenyans hope that the highway will serve as an anchor for economic development and make navigation in the country’s budding metropolis easier. At the same time, Kenya may lack the money and expertise necessary to maintain the highway in its current condition, and the costs of automobile-oriented development are certain to pose a significant long-term challenge for the region.

For the residents of Juja, a town roughly halfway between Nairobi and Thika, the highway has been a boon. According to Charles Mwangi, a local real estate agent, “Property values in [Juja] have in some instances witnessed 500 per cent increment with land owners capitalizing on the expected demand when the surrounding areas opens up.” Development around the highway is also surging near its endpoints. Actis, a global private equity firm, has invested $150 million (which buys a lot in Kenya) in a residential and commercial real-estate development near the highway’s entrance to Nairobi dubbed “Garden City”. Garden City will include a four-acre park that Actis hopes will be a gathering place for all of Nairobi’s residents.

Elsewhere, the impact of the new highway has been nothing short of catastrophic. Much of the expense involved in the grade-separations that make modern highways work stems from the need to accommodate various smaller roads that must cross above or below the highway or close. One easy way to save on construction costs—and the way apparently chosen by builders—is to close as many such roads as possible. At least 800 workers (that is only how many have come forward publicly) have been put out of work when their employers were forced out of business after the closing of necessary access roads. The affected companies claim to have been ignored by highway bureaucrats and are taking their case directly to President Mwai Kibaki, claiming “our instructions now are to demand from you […] the immediate provision of a reasonable and adequate access lane or entry for our clients to their respective parcels of land as appropriate.”

Perhaps the greatest fear accompanying the highway is that Kenya won’t prove itself up to the task of maintenance. Drivers are reportedly behaving more recklessly than anticipated, with high levels of drunk driving and speeding killing many and damaging infrastructure. Metal guardrails and poles are routinely stolen or vandalized, the cost of which is preventing the Ministry of Roads from attempting any new projects. Kenya’s swift economic rise makes a complete collapse of the highway a la the Chinese-financed Tazara Railway in Tanzania and Zambia extremely unlikely, but poor maintenance will mean a high death toll for years to come. Moreover, the congestion that will be alleviated on the Nairobi-Thika route is likely to move onto the city streets on either end where roads do not have the capacity to absorb an influx in traffic. The final impact of the highway will not be known for some time, but regardless of the effects, it is clear that Kenya’s heartland is changing very fast.