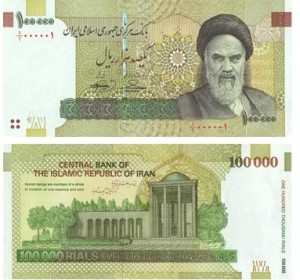 The world’s next hyperinflation episode appears to be underway in Iran, with potentially far-reaching political consequences. Officially, Iran pegs its currency—the rial—at 12,260 to the dollar. In early 2012, black market exchange rates began to diverge sharply from the 12,260 peg, eventually hovering at nearly double the official rate. Over the last month, the value of the rial has plunged further to about 35,500 rials to the dollar. With a monthly inflation rate now estimated at over sixty-nine percent, Iran has crossed into hyperinflation territory, defined as any monthly inflation rate in excess of fifty percent.

The declining value of the rial makes imported goods of all kinds more expensive, since they must be paid for in foreign currency. As international sanctions severely limit the availability of foreign currency, Iranians face skyrocketing prices. The situation is particularly troublesome since Iran needs to import much of the food and many of the manufactured goods consumed by its populace.

Matters came to a head on Wednesday, when Iranian protesters concerned about the currency collapse clashed with police in Tehran’s Grand Bazaar. Police also took time to shut down several merchants engaging in currency exchange. The protests were notable given that the Grand Bazaar has traditionally been a focus of support for the current regime. On Thursday, the Bazaar remained closed, though it seems a few currency exchanges are once more in operation.

Though the crisis only took off in the last several days, it has been in the making for years. Whereas countries like Saudi Arabia have used oil revenues to amass huge reserves of foreign currency, Iran has spent most of its money on subsidies for individual consumption. Much of the currency it has managed to accumulate is now inaccessible due to sanctions relating to its nuclear program. Maintaining a low exchange rate for years has been possible due to high oil revenues, but falling oil exports have made Iran’s fiscal situation increasingly untenable. Oil exports are down fifty-five percent from last year.

So far the government’s response to the escalating crisis has not inspired hope. Some even blame the regime for allowing hyperinflation, as it reduces the budget deficit. Actions intended to forestall the situation, such as the closing of currency exchanges and capping interest rates, appear to have just led to more panic. Two weeks ago, the government attempted to calm currency traders by opening a “foreign exchange center” that would undercut black market rates. The failure of the exchange convinced many that Iran’s central bank is basically out of options.

In a meeting on Wednesday, President Mahmoud Ahmadinejad and members of the Iranian Parliament all seemed rather confused, and wasted no time in pointing fingers at each other. The speaker of the Iranian Parliament, Ali Larijani, blamed Ahmadinejad’s redistribution policies for “eighty percent” of the problem, while acknowledging a role for the sanctions. Ahmadinejad hinted that Parliament should share in the blame, and later ordered the Intelligence Ministry to investigate twenty-two individuals for causing “overwhelming turbulence” in Iran’s foreign currency market.

Outside Iran, and perhaps within, many hope that the current crisis will lead the country to reconsider its nuclear program. The final magnitude and consequences of the crisis have yet to be determined, but it will likely prove the largest challenge the government has faced in years, if not decades. On Wednesday, Supreme Leader Ayatollah Ali Khamenei vowed, in a somewhat ambiguous context, that Iran “will never surrender to pressure.” At the very least, the crisis promises to be a potentially crippling problem for President Ahmadinejad, who implied in his conversation with Larijani that he might resign sooner rather than later, or in his words, “say goodbye.”