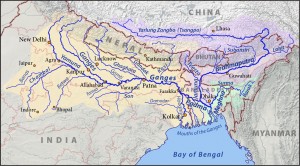 The seven states of Northeastern India make up a diverse, historic, and (as GeoCurrents has previously noted) unstable region. Recent flooding and landslides have claimed at least 81 lives around the Brahmaputra River (map at left from Wikipedia), forced hundreds of thousands to evacuate, and garnered worldwide attention. Indian Prime Minister Manmohan Singh has gone to Assam, perhaps the worst hit state, and promised at least Rs 500 crore (~$90 million) in aid. The floods are a major humanitarian crisis, and they may help to deflect attention from recent escalations in the long-simmering border dispute between Assam and its neighboring state, Meghalaya.

On June 30, over six-hundred Khasi[1], members of a tribal group located primarily in Meghalaya but also in parts of Assam and Bangladesh, began a hunger strike aimed at encouraging the two Indian states to resolve the quarrel over the status of twelve disputed areas that has kindled years of violence. The unresolved issue has also kept rural villages along the Meghalaya-Assam border from receiving the benefits of government electrification programs. Since a January, 21, 2010 GeoCurrents post cautiously observed the “declining violence in Northeast India”, violence has continued to stay at a relatively low level compared to the 2000s. However, most of the underlying issues remain unresolved, and the potential remains for future clashes. 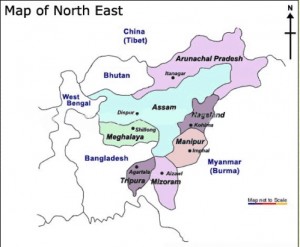 Entailing much more than the border dispute between Meghalaya and Assam, strife in Northeast India has been a function of ethnic and tribal rivalries playing themselves out against a background of nationalist and antinationalist agitation. For example, the militant Hynniewtrep National Liberation Council (HNLC), based in Meghalaya, continues to vociferously oppose what it sees as attempts by India’s national government to “Indianise or else to Hindunise the Hynniewtrep race”. The HNLC also sets itself up in opposition to the Garo, a largely Christian group that is the second largest ethnic formation in Meghalaya after the aforementioned Khasi.

The people of Northeast India also face many wrenching challenges as both a globalized economy and outside social norms gain a foothold hold in their land. The Khasi and the Garo remain, for the most part, matrilineal societies where property and clan membership is passed down through female descendants. This certainly adds a measure of stability to womens’ lives, and female defenders of the system are able to point to the plight of women in other nearby groups and remark favorably on the status and safety of women in societies adhering to matrilineal traditions. Men who oppose the system claim that it “breeds a culture of men who feel useless”, feeds social problems like alcoholism, and denies men the inheritance they need to build their lives. The debate has been going on for years, and seems unlikely to end soon.

With flooding now the dominant issue in the Brahmaputra watershed, it remains to be seen whether the chaos and disruption that follows will bring more violence in its wake. Most of the Indian outposts along the border with Bangladesh have flooded as local officials express concerns about national security. Living near some of the rainiest places on earth, as the people who make their homes along the Brahmaputra do, can be a dangerous proposition.

Readers interested in a fantastic satellite image of the Brahmaputra flooding should see this one from the NASA Earth Observatory.

[1] GeoCurrents readers would be interested to note that the Khasi are the northernmost speakers of an Austro-Asiatic language.