The mostly rural and relatively poor Solomon Islands faces many environmental problems, which development of the country’s small mining sector may soon exacerbate. The expansion of human settlement, agriculture, and timber harvesting has led to deforestation, while blast fishing and the illegal exportation of exotic birds have frustrated conservation efforts. The country has rampant political corruption, which prevents effective environmental policy, and has been recovering from a violent past. In 1999, civil war broke out between the indigenous people of Guadalcanal and migrants from the island of Malaita, and in 2006, native Melanesian Solomon Islanders rioted against the small but economically influential Chinese community.

Although extraction from the small Gold Ridge mine dropped precipitously during the civil war, the Australian company Allied Gold has purchased rights to the mine and plans to greatly increase production. The company has hired over 500 local employees and plans to operate for at least the next ten years, predicting that its gold will eventually make up as much as a third of the country’s GDP (current GDP per capita is $3,200). Though additional mines may not open soon, other firms plan to expand into the Solomon Islands to extract gold and copper. Anglogold Ashanti, the Newmont Mining Corporation, Axiom Mining Ltd., and the Sumitomo Corporation have all shown interest in the country. 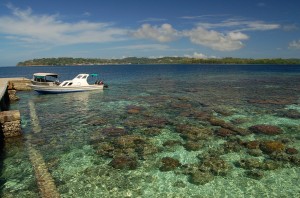 As opposed to nearby countries such as Papua New Guinea and New Caledonia, the Solomon Islands has historically produced few minerals. Though its mines may not be as lucrative as its neighbors’, the country could receive great economic benefits from attracting international mining firms, as the last decade of unrest has repelled many foreign investors. China’s large appetite for minerals has made the development of new mines especially profitable. However, open pit mines cause deforestation and can release poisonous chemicals into the water supply.

The experiences of nearby countries portend the possible downsides of mineral extraction. In an extreme case, phosphate revenues temporarily gave the Micronesian island state of Nauru the highest GDP per capita in the world—until the trust fund holding the nation’s mining profits declined sharply in value. Today, the country is in a state of severe economic and environmental distress and has become heavily reliant on foreign aid. There are already worrying signs in the Solomon Islands that the Allied Gold has evaded paying taxes by misrepresenting the amount of gold it has extracted. The Malaita Ma’asina Forum suspects that the company may even further avoid paying the government by merging with another Australian mining company.