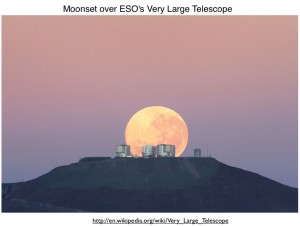 In early October, the Noche Zero conference in the Atacama region of northern Chile will bring together lighting designers, urban planners, government officials, and astronomers concerned about the effects of “light pollution” and the resulting disappearance of stars from the night sky. As the event’s website frame the issue:

FUTURE: ZERO LIGHT POLLUTION. TO GET BACK THE CLEAR SKY NIGHTS FOR OUR CITIES AND LANDSCAPES. NOCHE ZERO WILL BE AN INSPIRATIONAL EVENT ABOUT THE ROLE OF DARKNESS IN THE MODERN CITIES, LIGHTING DESIGN AND LIFE. IT WILL COVER WIDE RANGE OF ASPECTS OF DARKNESS, FOR ASTRONOMICAL, ECOLOGICAL AND MEDICAL REASONS ALSO FOR CULTURE, HERITAGE, VISUAL COMFORT AND THE PRIVILEGE OF NATURE.

The Noche Zero conference will be held in the Atacama Desert for good reason. As the driest place on Earth, the sparsely populated region has the world’s clearest skies. As a result, it is the site of some of the largest and most expensive telescope arrays. The European Southern Observatory’s Very Large Telescope (VLT) may have the least imaginative name of any major scientific facility, but it is widely regarded as “the most productive ground-based facility for astronomy.” Equally important are the radio telescopes of the Atacama Large Millimetre Array (ALMA), a joint program of the EU, the United States, Canada, several East Asian countries, and the Republic of Chile. Although it will not be completed until 2013, ALMA is already allowing astronomers to make impressive findings. A recent report notes their discovery of glycolaldehyde, “a sugar compound described as essential to the existence of life,” in the gas cloud surrounding a star somewhat similar to the sun located some 400 light years from Earth.