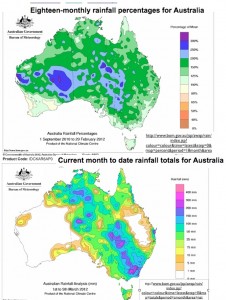 Interior Australia is noted for its extreme climatic oscillations, especially in regard to precipitation. If anything, the change from wet to dry periods seems to be getting more extreme. In the first decade of this century, much of Australia suffered its worst drought in a thousand years, which is saying a lot for such a drought-plagued region. But in 2010, a transition to a wet phase occurred. As one of the maps posted here shows, almost the entire continent has received much more rainfall than average over the past 18 months.

Since late February, much of central Australia has received drenching rain, leading to widespread flooding. In a five-day period before March 2, Alice Springs in the heart of the outback received more than its average annual precipitation. As result, the normally bone-dry Todd River has begun to flow. Rain continues to fall in the area, leading to concerns about further flooding. The rainfall is also turning Australia’s “red center” to a verdant shade of green, delighting those in the livestock industry.