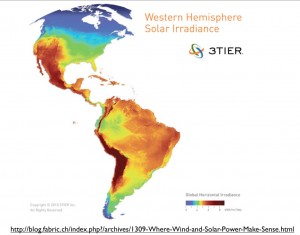 The small city (population 65,000) of Tecate in Mexico’s state of Baja California, just south of the U.S. border, is best know for its popular beer of the same name. But if current plans come to fruition, Tecate will soon be home to the world’s largest concentrated photovoltaic (CPV) power farm, producing 450 megawatts of electricity. (It is expected, however, that larger CPV projects will soon be announced by China.) The Tecate facility will use arrays made by SolFocus, a San Jose, California firm. Ownership will be shared by Mexico’s SolMex Energy S.A. de C.V and Synergy Technologies of the United States, which responsible for the facility’s design. The first 150 megawatts of electricity will be used locally, but much of the rest will probably be exported to the United States.

Renewable energy development in Mexico had previously been focused on wind power, but the country’s solar potential is large.  According to a recent Market Watch (Wall Street Journal) report, “Northern Mexico has the third greatest solar resource in the world, making it an ideal location for this project.” Such a claim seems rather exaggerated, as it is difficult to specify  exactly what constitutes “solar resources”; many parts of the world receive more solar radiation that the Tecate area, which experiences fairly frequent cloud coverage in the winter months. Building large solar facilities in northern Mexico, however, is much easier than doing so across the border in California, where environmental lawsuits present a major obstacle.