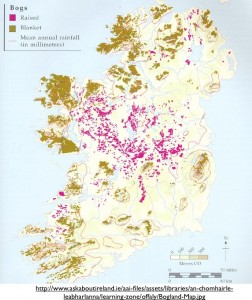 An editorial in today’s New York Times, “Drop That Bog,” urges gardeners not to use peat moss, as doing so entail the destruction of bogs and releases stored carbon dioxide into the atmosphere. The editorial also notes that peat “has been used for centuries as a fuel in Scotland, Britain, and Ireland,” a geographically odd comment that implies that Scotland is not part of Britain. Not mentioned in the editorial is the fact that peat mining for energy is a significant—and controversial—business in Ireland. The Bord na Móna (‘peat board’), a semi-state company, engages in the mechanized mining of peat bogs; in 2008, its revenues came in at more than 400 million Euros, and its profits totaled more than 15 million Euros. Due to environmental pressure, the Bord na Móna is currently planning to phase out peat extraction over the next twenty years, turning to renewable energy production instead.

The peat-mining controversy in Ireland is currently intensifying. A recent article in The Independent describes the row in colorful language:

In events that might inspire an Irish dramatist, an unholy turf war has broken out across the country’s bogs, pitting the government, the European Commission and the green lobby against rural-dwellers fighting for the right to heat their homes. … The Irish government has issued formal warnings that this weekend could see prosecutions if turf cutters target protected bogs. But a cutters’ organisation, using unusually militant rhetoric, has issued a defiant clarion call evoking the Easter Rising, the insurrection which nearly a century ago culminated in the British withdrawal from southern Ireland.

Much of Ireland’s peat controversy has focused on the Bog of Allen, a massive wetland that recently covered 958 square kilometers (370 square miles) in the central part of the island. The Bog of Allen is widely viewed as an essential aspect of Irish history and heritage, but much of it has been transformed by peat extraction. Preservation efforts are on-going, but remain controversial. According to an article published yesterday in the Irish Times:

THE IRISH Peatland Conservation Council has called on Minister for Heritage Jimmy Deenihan to “get tough” on those responsible for illegally cutting turf on raised bogs designated for protection under the EU habitats directive. It is a shameful disgrace…that people still feel the need to go out and destroy the natural heritage of Ireland and to celebrate this behaviour using social media sites,” said Dr Catherine O’Connell, the council’s chief executive. …Dr O’Connell said thousands of visitors who greatly enjoy the Bog of Allen nature centre in Lullymore, Co Kildare, would “stop coming if we do not stand up and protect our natural heritage”.