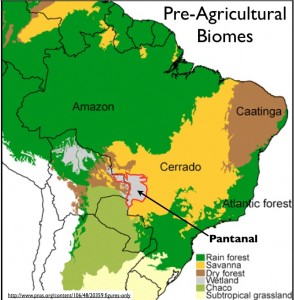 A recent article in Physorg.com claims that Brazil will soon surpass the United States to become the word’s leading producer of genetically modified crops. Currently, the author contends, the U.S. is the top location for bio-tech agriculture, with 69 million hectares under cultivation, as opposed to Brazil’s 30.3 million; Argentina (23.7 million hectares) and India (10.6 million hectares) occupy third and fourth place respectively. But as acreage under genetically modified crops is expanding more rapidly in Brazil than in the United States, the positions of the two countries are expected to reverse within a few years.

The Brazilian techno-farming boom is related to the recent agricultural colonization of the Cerrado, a vast savannah zone with a tropical wet and dry climate located to the south of the Amazonian rainforest. Until the late twentieth century, the Cerrado was a zone of low-intensity cattle ranching, as its soils were too impoverished to support widespread agriculture. Brazilian research programs, however, figured out how to transform the Cerrado into the country’s new bread-basket— although “soy basket” might be the better term. Farming in the Cerrado is highly mechanized and chemically intensive, and most local growers are enthusiastic proponents of the genetic manipulation of crops.

To make the potassium-poor Cerrado soils productive, vast quantities of potash are required. Canada is currently the “Saudi Arabia of potash,” with production concentrated in Saskatchewan. The Potash Corporation of Saskatchewan Inc. (“PotashCorp”) is not only the world’s largest potash producer, but is also the third largest producer of nitrogen and phosphate, and thus occupies a pivotal role in the global fertilizer trade. PotashCorp is currently thriving. As Oakshire Financial recently reported, “Major potash stocks are beginning to raise eyebrows with impressive profit margins.” The same article goes on to warn, however, that, “industry giants will face competition from greenfield and brownfield projects in the works.” As it so happens, Brazil has recently discovered sizable potash deposits of its own in the Amazon and in the states of Bahia and Espirito Santo. Brazil now imports more than 90 percent of its potash needs, a figure that will probably decline in the coming years. As Bloomberg recently reported, “The issue of fertilizer is strategic for Brazil. …  The government is preparing a self-sufficiency plan.”

Brazil’s Cerrado is rich in wildlife and endemic species, yet has seen relatively few conservation initiatives. Only an estimated 1.5 percent of the Cerrado habitat has been protected in federal reserves. Run-off from farms in the region is also threatening the Pantanal, often regarded as the world’s largest wetland. Unlike the environmental degradation of the Amazon, that of the Cerrado and the Pantanal often escapes global notice.

The role of potash in world history is greater than is commonly realized. The potash market, for example, was crucial in the colonization of the eastern United States. As the farming frontier pushed west of the Appalachian Mountains in the early 1800s, settlers faced the twin challenges of clearing thick hardwood forests and obtaining enough cash to see them through the rough early years. By burning trees for potash, most of which was exported to Britain, both obstacles could be surmounted. The mining of subterranean potash salts began in Germany in the mid-1800s, vastly increasing the global supply.