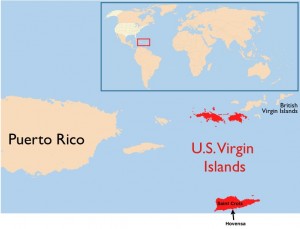 Until recently, Hovensa in the U.S. Virgin Islands was one of the world’s largest petroleum refineries, with a capacity of almost 500,000 barrels per day. As of this month, Hovensa is no longer refining oil, but is merely serving as a storage facility. Some 1,900 workers have lost their jobs as a result, devastating the economy of St. Croix and, more generally, that of the U.S. Virgin Islands. Estimates are that unemployment in this U.S. territory will jump from 9.6 per cent to 18.7 percent. The local government has already reduced public salaries by eight percent and has laid-off 500 state workers to deal with budget shortfalls. According to local sources, “The Hovensa announcement has caused a universal shudder of fear and anxiety to pass through our islands. … Unlike a hurricane, we had no warning this was coming, no time to prepare, to adjust to the possibility that we might be hit.”

Corporate officials claim that the refinery lost more than one billion U.S. dollars over the past few years due of weak demand and high operating costs. Hovensa has also been hit by environmental regulations, paying a US$5.3 million fine in 2011 for Clean Air Act violations. The facility may also have had difficulties stemming from its unusual ownership structure: Hovensa was a joint venture of Hess Corporation of New York and state-owned Petróleos de Venezuela, S.A. (PDVSA).

It is not clear what, if anything, could replace the employment lost at Hovensa. The Virgin Islands government wants to encourage renewable energy, and the U.S. administrations thinks that rum exports will increase, but neither seems like much of a replacement. Tourism is the islands’ main economic activity, generating about seventy percent of GDP, but it is unclear how much more the tourism sector can expand. Perhaps greater benefits can be realized by the current broadband internet construction project, which will entail “244 miles of new fiber cables connecting over 700 pieces of network equipment, and will establish or renovate over 45 public computer centers throughout the territory.”