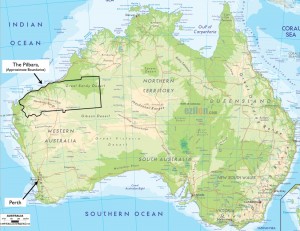 The Pilbara is a vast, sparsely settled region in northwestern Australia noted for its gargantuan reserves of iron-ore and other minerals. Covering 193,823 sq mi (502,000 km2), the Pilbara is substantially larger than California, yet it has fewer than 50,000 permanent inhabitants. The region’s workforce, however, is much larger than its population would indicate, as most of the employees in the booming mining sector are classified as transient. They typically reside in the Perth area, the metropolitan core of Western Australia, and fly up to the mining country for working stints of a week or two.

The government of Western Australia, however, has recently decided that the “fly in; fly out” model of Pilbara employment is inefficient, and that more workers should reside permanently in the region. In mid-February, as noted by Perth Now, “Planning Minister John Day released the Pilbara Planning and Infrastructure Framework…, which will support the State Government’s lofty ambitions to attract 140,000 permanent residents to the region in just over two decades…”

The climate of the Pilbara is rigorous. This semi-arid region is brutally hot for half of the year; the town of Marble Bar holds the world’s records for the most consecutive days—160—in which the high temperature exceeded 100 degrees Fahrenheit (37.8 degrees Celsius). Much of the precipitation that does fall comes in the form of drenching tropical cyclones, which strike on average in seven out of ten years.

Complaints about settling in the Pilbara, however, seem to focus more on urban amenities than climate. As commentator John Smith noted in regard to the article cited above:

I have been flying in and out for 2 years and I would agree that it is not a particularly nice place to live. Scenery is nothing compared to the East Coast or many other places, and infrastructure is only to support the miners. No movie theatres, no decent restaurant, can’t get a decent coffee even if paying $5 minimum. And housing costs are absolutely ridiculous. Someone needs to fix that if anything is to change, it will take the government to force them to release a million acres of land from the 400 million available. Give it away for free. Otherwise Australia will price itself out of the market for minerals—it is already starting to happen.