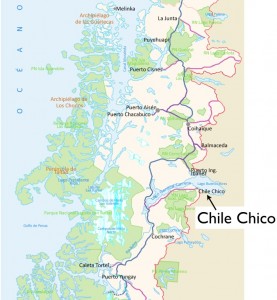 FreshPlaza—the global fresh produce news service—recently reported on the surge of cherry exports from Chilean Patagonia to Asia and Europe. The small town of Chile Chico (population 4,400) alone exported 270 tons of cherries this year. As FreshPlaza notes, the produce firm Cherries Patagonia now inspects and seals containers of cherries in Chile Chico, which are not opened until they reach their destinations. Orchardists in the region are optimistic about future growth, as the Asian cherry market is booming.

Over the past several decades, Chile has secured a profitable economic niche as the main producer of off-season fruit for the Northern Hemisphere, securing over half of the market. Such exports have long been dominated by grapes and apples, most of which have been sent to the United States. Chile is currently diversifying its fruit exports, focusing on such crops as peaches, plums, blueberries, avocados, and cherries.

Sweet cherries can be especially profitable, but they are highly perishable, and thus demand special care. The cherry season is also brief, but it can be extended by establishing orchards in different latitudinal zones—which is key to the current Patagonian cherry boom. Most Chilean fruit production is concentrated in the fertile Valle Central in the central region of the country. The cherry harvest here is typically over by December; to extend the season, orchards must be established further to the south, in Chilean Patagonia.

In general terms, however, southern Chile is an impossible place for fruit cultivation, as its climate is wet and raw, its topography rugged, and its soils thin and poor. But the Chile Chico region is an exception, as it is located in an area of subdued topography on the eastern side of the Andes Mountains, along the shore of Lake General Carrera (known in Argentina as Lake Buenos Aires). The climate here is dry, but water for irrigation is plentiful and the massive lake itself moderates the weather. Until the 1990s, Chile Chico was a relatively isolated town, more closely linked economically to Argentina than to the rest of Chile. The opening of the Carretera Austral (CH-7) highway at that time, however, firmly linked the sparsely settled region to the rest of the country.