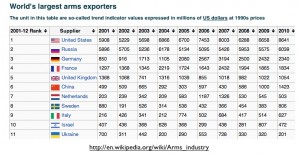 Sweden’s Green Party was not pleased with the revelation, and has demanded an investigation. One of the leaders of the party stated that, “Sweden should not ruin its good reputation by supporting the militaries of dictatorships.”

Although Sweden has a pacifistic reputation, it is a major arms exporter. According to the Wikipedia, Sweden occupies the 8th highest position in this global industry, selling more weapons abroad than Italy,  Israel, or Ukraine.