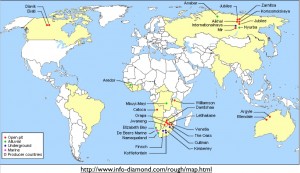 Rio Tinto, the British-Australian mining giant, recently announced that it would begin investing in Russian diamond extraction, forming a partnership with the Russian firm Alrosa. Alrosa, 90 percent of which is owned by the Russian government, is now the world’s largest diamond miner, having surpassed De Beers in 2011. Rio Tinto’s diamond ventures are also rapidly growing. In Russia, the firm is mostly interested in the Lomonosov deposit, located in Arkhangelsk Oblast in northern European Russia. Most Russian diamond mining, however, takes places in Yakutia (Sakha), in north-central Siberia.

The diamond business is currently surging, due in part to rapidly growing demand from China. Production has traditionally been concentrated in southern Africa, with Botswana occupying the highest position as recently as several years ago. Russia, however, is now the world’s top diamond producer, both in terms of quantity and value. Solid information on global diamond mining, however, is difficult to obtain, as different sources give different rankings.

Over ninety percent of the world’s extracted diamonds are sent to India for rough processing. Russian diamonds are currently exported to India through a variety of intermediary channels. Russia and India, however, are now negotiating for the direct export of rough stones from the diamond fields of Yakutia and Arkhangelsk to the cutting floors of Surat in Gujarat state.