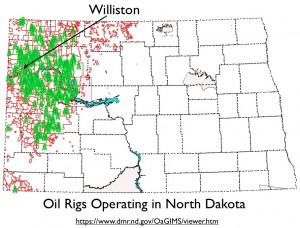 North Dakota is a sparsely settled state that has seen its population languish for decades. Home to 680,845 people in 1930, North Dakota held only 672,591in 2010. Currently, however, the state is experiencing a rebound, most notably in its oil-rich northwestern region. Workers are flowing into Williston (population 14,716 in 2010), the main town in Bakken Formation area, which has oil reserves estimated at some 18 to 24 billion barrels.

The recent population surge is resulting in major issues in the Williston area. Workers are arriving faster than they can be accommodated. The lack of local housing has forced oil-field employees to set up “man camps” where they live in recreational vehicles. Many established residents view such settlements with alarm. As a result, the Williston City Commission has recently “introduced an ordinance that would make it illegal to live in a camper within city boundaries. If passed, the law would make living in a home on wheels a misdemeanor punishable by a $500 fine.” Many workers stay in Williston during the work week only, returning home during their off periods. As a result, Williston’s train station is now the fastest-growing Amtrak depot in the country: “The once-sleepy little train station in western North Dakota where the sole ticket agent knew passengers by name is now overflowing with oil workers.”

The booming economy of the region demands other forms of infrastructural investment as well. Communications demands were recently addressed when Midcontinent Communications announced a $3 million plan to extend its fiber optic network to Williston, promising rapid, broadband internet connections.

Rapid growth is also resulting in a crime surge. Although North Dakota still has one of the lowest crime rates in the country, the Williston area is no longer particularly safe. According to a recent article in Boston.com, “Booming oil production in the Northern Plains is spurring law enforcement from the U.S. and Canada to gird for a spike in crimes ranging from drug trafficking to prostitution.”