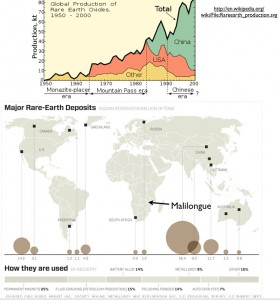 Over the past several years, China’s near monopolization of the supply of rare earth elements has received much attention in the global media. Less widely reported is the quest to locate and develop alternative supplies. Currently, an Australian firm is building a rare earth refinery in Malaysia to process radioactive ore from Western Australia. In late January 2012, Malaysia granted a license for the project to proceed, despite protests from local environmentalists. Estonia is now extracting rare earth oxides in sizable quantities from mine tailings; according to a January 27 press release, “The US-incorporated producer of rare earth metals Molycorp Silmet, based in northeastern Estonia, may soon become the world’s largest producer of niobium, a rare earth metal used in electronics, aviation and energy production.” According to the Wikipedia, France is currently setting up two factories to recycle rare earth elements from electronic waste.

Last summer, another report indicated that rare earth minerals are abundant in “deep sea mud” in parts of the Pacific. The report further claimed that these deposits “are also much higher in heavy rare earth elements — the kind that are more important in technology products — than those in China.”

More recently, the Australian firm Kimberley Rare Earths announced what could be a massive new ore discovery in western Mozambique. The complexity of rare earth deposits is evident in the news release: “A sample [was] found to comprise major xenotime and minor monazite and zircon. In addition to yttrium, the xenotime shows appreciable dysprosium and erbium.”

Meanwhile, MarketWatch reported in mid-February that, “Over the last month Rare Earth stocks have outperformed the broader market by a large margin as demand for the 17 elements continues to skyrocket.” The same article mentions new rare earth mining projects in Alaska, British Columbia, and Wyoming.