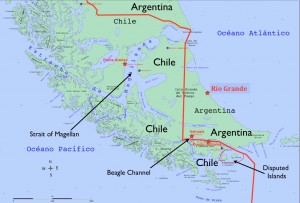 A recent article in Advanced Television notes that DirectTV is planning to invest U.S. $32 million in Argentina, much of which will be devoted to manufacturing set-top boxes. The devices will be made in Tierra del Fuego, in the extreme south of the country. Many of the boxes will be exported to other Latin American countries; Venezuela alone is expected to purchase up to one million annually.

The Argentine province of Tierra del Fuego, occupying the eastern half of the island of the same name, might seem like an odd place to receive such an investment. It is, after all, remote, sparsely populated (population 126,000), and harsh of climate. But Argentina has been encouraging industrial development in the far south for some time. Tierra del Fuego is exempt from VAT (value added tax) and federal income taxes. The Argentine government has targeted high tech manufacturing for the region. The city of Río Grande on the eastern coast has emerged as a manufacturing and assembly hub for laptops, high-definition televisions, and cell phones. South Korean firms have invested heavily. Largely as a consequence of such initiatives, the per capita GDP of Tierra del Fuego is roughly two and a half times the national average.

The Argentine government is keen to develop its half of the island in part for strategic regions. Argentina claims the extensive British-controlled territories of the Falkland Islands (Malvinas) and South Georgia in the South Atlantic, as well as a wedge of Antarctica, and it hopes to bolster its position by bringing people, industry, and infrastructure to Tierra del Fuego. Until relatively recently, Argentina had tussled with Chile over several islands in the Beagle Chanel. After coming to the brink of war over the issue in 1978, Argentine shifted its attention to the British-owned Falklands. When Argentina’s military government fell after the failed war, relations with Chile improved, and they are now cordial. It still rankles Argentine pride, however, that Chile controls not only the disputed islands, but also the Strait of Magellan, which separates Tierra del Fuego from the South American mainland.

Note that the Argentine city on the Beagle Channel, Ushuaia (population 57,000), is located considerably to the west of the main Chilean settlement on the waterway, Puerto Williams (population 2,300). Debates are held over which is the southernmost city in the world. Puerto Williams is located farther to the south, but its status as a city is questionable.