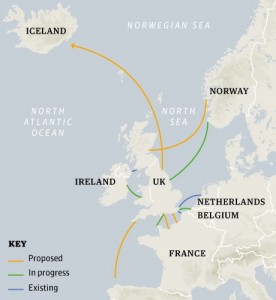 Iceland is by far the world’s richest country in terms of per capita renewable energy. 81 percent of Iceland’s total energy needs are derived from renewable sources, mostly geothermal and hydroelectric, as is 100 percent of its electricity. As a result of Iceland’s abundant resources, its electrical power is cheaper than anywhere else in Europe. The possibilities for expansion, moreover, are substantial, especially in the areas of hydroelectric power and wind power.

Economically troubled Iceland has been keen to take advantage of its low-cost, renewable energy resources on the international market. It has long engaged in aluminum smelting on a massive scale, a energy-intensive industry that raises environmental concerns of its own. Roughly 80 percent of Iceland’s electricity is currently used in aluminum plants. More recently, Iceland has turned to developing electricity-intensive server farms, an activity that also benefits from the country’s cool climate (computer servers require extensive cooling in warm areas). In February, a firm called Verne Global opened a large server farm on a decommissioned NATO base near the country’s main airport.

More recently, plans have been developed to directly export electricity from Iceland to the U.K. through undersea “interconnector cables.” Transmitting energy by way of High Voltage Direct Current (HVDC), interconnector cables are highly energy efficient, losing only two to three percent of power over 1,000 kilometers. Laying the cables, however, would be a very expensive proposition, owing both to engineering challenges and to the fact that each kilometer will contain roughly 800 metric tons of copper. In late May, however, Iceland and the U.K. agreed to begin working on the project and to cooperate more generally on energy initiatives. The U.K. has limited renewable energy resources of its own, and hence is eager to tap those of other countries. As the Guardian map of existing and proposed interconnector cables posted here indicates, Britain is also interested in Norway’s abundant hydroelectric resources.

Although the electricity-export scheme would have major environmental benefits when analyzed at the regional and global scales, in regard to Iceland it would come at a certain cost. As a result, Icelandic environmental groups remain skeptical. According to a recent article in Utility Products, environmental activists in Iceland argue that “The proposed cables would put pressure on building more power plants, both hydro and geothermal, for exporting energy. These are often located in sensitive wilderness areas which we want to protect. In addition, the Icelandic power transmission system would need much bigger transmission lines with associated visual and other environmental impacts to connect to the undersea cables…”